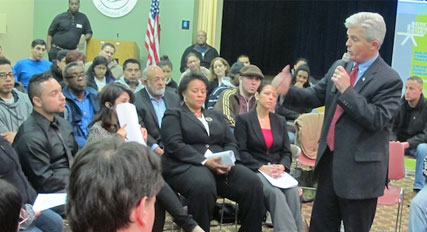 At an open forum on Wednesday night, County Executive Steve Bellone showed his support for diverse and immigrant communities on Long Island. At an event held at the Brentwood Library, more than one hundred Suffolk County residents from Latino, African-American, and immigrant communities joined the County Executive and posed questions about the most pressing issues facing Suffolk’s diverse communities: jobs, housing, and diversity.

The event was hosted by Make the Road New York, New York Communities for Change, the Long Island Civic Engagement Table, and the NAACP.

Bellone, who has twice declared Suffolk County a welcoming county, reiterated that, “Our diversity is our strength.” In particular, he emphasized that immigrant residents “add to the economy and quality of life” in the county, and that “immigration makes us better.”

People who leave their country to come to the U.S. seeking a better way of life, according to Bellone, are “extraordinary.”

He insisted that federal laws must be changed to pass comprehensive immigration reform “and allow immigrants to contribute.” Several times throughout the event, Bellone stressed that the law and the police are here to protect and serve all residents, regardless of legal status.

In response to questions about educational inequalities in diverse school districts, Bellone stressed that the county “needs to engage with diverse community school districts to work for comprehensive solutions.” To that end, he said the county needs to invest resources into pre-kindergarten programs in order to help kids get off to the right start and see them through to graduation instead of investing in putting people in jail.

On the issue of jobs, Bellone told residents that he supported an increase in the minimum wage above the current rate of $9 per hour, but noted that it must first come from the federal level, followed by the state level.

He also condemned the practice of stealing wages from undocumented workers. “Wage theft is despicable,” he said, and added that law enforcement must be made aware of the issue. But the first step, he admitted, is to make sure that workers are comfortable reporting the issue.

Among the actions he promised to take, Bellone vowed to “make the police force the most diverse by far in the history of the county” by not only recruiting people but also training them for the police department.

Miriam Elaraby, member of Make the Road New York, said: “This event was an important way that our community and our elected representatives can join together to better our community. I’m pleased that issues of diversity, employment, and housing are being discussed, because they’re the main priorities for the community.