County Executive Bellone’s presence at the press conference marked an important change in tone on immigration for Suffolk County. We are finally glad to have a County Executive who is now ready to listen and work with us. 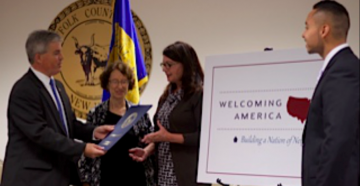 National Welcoming Week is the brainchild of a group called Welcoming America, a grassroots-driven collaborative of 20 affiliates across the country. Welcoming Long Island has been a proud affiliate for the past two years. The week was dedicated to promoting meaningful connections and a spirit of unity between U.S. and foreign-born Americans. We hope the issues National Welcoming Week raised and the conversations it inspired will help determine what kind of community we’re building today – and what kind of community we’ll leave for the coming generation.

County Executive Bellone emphasized the importance of the occasion, stating that he was sending a “clear and direct message” that Long Island is a community that embraces immigrants and that Suffolk County is a place that “welcomes new Americans.”

He also expressed his support for the integration of immigrants into the “family” of Suffolk County, noting that it was important given the divisive policies that existed in the past that hindered positive developments in relations between communities.

The County Executive wrapped up the press conference by thanking everyone that had contributed to the occasion, and presented a proclamation to Welcoming Long Island from the Suffolk County Government recognizing September 15-22 as Welcoming Week in Suffolk.

We’ve been using Herstory’s Latinas Write/Escribenanthology of bilingual memoir-writing by Latinas for our welcoming reading circles in both the Port Jefferson and Brentwood communities that meet once a month. At each reading circle, two authors whose stories appear in the book come and read their stories and lend their voices to their written word.
Spanish speakers follow along in Spanish, and English speakers follow along in English.

Following the stories, a discussion is held amongst the participants of the reading circle. Erika Duncan, the Founder and Artistic Director of Herstory Writers Workshop, describes the Welcoming Reading Circles as a tool for “promoting empathy, new friendships, and community building.”She was excited to have been given the opportunity to hold a reading circle with Suffolk County officials; a feat that would not have been possible one year ago.

The featured reader for the presentation, Elba Ordoñez, a native of Honduras read her story of a horrifying workplace accident that took place at a local vitamin factory on Long Island that left her left thumb severely damaged.

The power of the story was palpable. Everyone in attendance: government officials, community members, and members of the press remained silent and pensive at the end of the reading.  Within a few moments, however, everyone congratulated Elba for having the courage to come to the reading circle to share her story. In addition, everyone praised Elba for overcoming her fears in speaking out, not only for herself, but also for other women in her position. The participants of the circle then engaged in a discussion about what they gained from listening to the story and how such workshops could be integrated in Suffolk County communities with the help of Suffolk government officials.

Long Island Wins and Welcoming Long Island thanks and congratulates County Executive Steve Bellone for participating in National Welcoming Week and for his commitment to making sure that “Suffolk County still stands as a beacon of freedom and opportunity.”