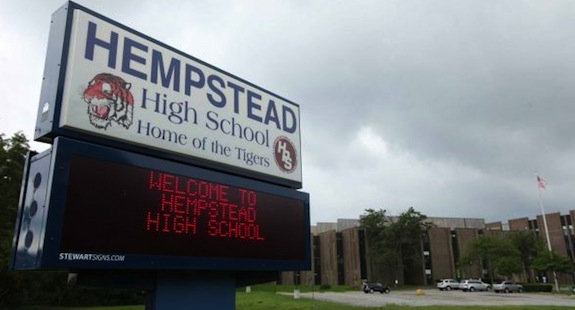 Advocates and members of the community gathered in Hempstead on Friday for a rally against what they are calling the school district’s willful violation of the rights of immigrant students.

Last week, New York State Attorney General Eric Schneiderman issued a letter to the district highlighting incidents of families being denied the opportunity to register for school. Students were placed on a “wait-list” and at least one family had to return more than six times before being registered.

According to new emergency regulations issued by the Board of Regents in December, students who request enrollment “shall be enrolled and shall begin attendance on the next school day…”

This comes after advocates discovered in October a list of 30 students who were registered but not allowed to attend classes.

Jason Starr, Nassau County chapter director of the New York Civil Liberties Union, told Long Island Wins prior to the rally that he is “appalled” that the district is either “unable or unwilling” to follow the law.

“The district was made aware of illegal actions in the fall… and they have gone on to do the exact same thing. They must immediately stop any action that would delay registration,” said Starr.

The letter from Schneiderman’s office requests any and all documents relating the enrollment practices and the aforementioned “wait list.” Hempstead School Board President Lamont Johnson insists there is no “wait list.”

However, the community says the letter is not enough. The group is calling for the Attorney General’s office and the New York State Board of Education to place the district under formal monitoring and that it should “demand, not request, documents,” according to Starr.

They also want the school board to terminate Superintendent Susan Johnson, whose failed leadership they say is part of the problem. “The buck stops with the superintendent,” said Starr.