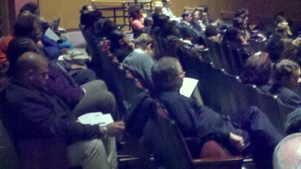 To open last night’s event, Joselo Lucero read the legislation authorizing the second week of November as a time for fostering respect and acceptance throughout the county in memory of his brother. The bill was passed unanimously by the Suffolk Legislature back in March.

“Our immigrant communities have been terrorized over the last two decades,” Long Island Immigrant Alliance Director Luis Valenzuela told the audience. “When authorities point an accusing finger at a group…it should not surprise us that some believe they have permission to hate.”

Michele Lynch, the chair of the Long Island Immigrant Alliance board, reminded the audience, “there is no better way to remember Marcelo than to keep working towards a more inclusive Long Island free of hate and racism.”

Speaker after speaker called for an end to bias against immigrants, the LGBT community, and people of color. This was echoed in a speech by Babylon Town Supervisor Steve Bellone, who is running for the office of Suffolk County Executive. His opponent, Angie Carpenter, was invited, but did not attend.

Bellone said that if elected county executive, he would make the Suffolk County Hate Crimes Task Force an independent and permanent part of Suffolk government. The current task force is heavily weighted with appointees of the current executive, Steve Levy.

I spoke with Republican Legislator Ed Romaine after the event and he told me that he hopes that when a new administration takes office in January, the level of civil discourse in the county will rise dramatically.