Just about 10 months before the next general election, one thing is clear: Voters of color will be critical.

In 2008, African-American and Latino voters were crucial to Barack Obama’s victory. Now, some pundits wonder whether the president can maintain Latinos’ support after failing to pass federal immigration legislation. Others question whether Republicans’ draconian positions on immigration will forever alienate Latinos.

Meanwhile, in swing states like Ohio and Florida, conservatives have passed voter identification laws that will almost certainly disenfranchise voters of color. Groups like the NAACP are fighting back.

Voters from ethnic and racial minority groups are just as important on Long Island, where some competitive races for State Senate and the House of Representatives are likely. In Suffolk County, for instance, African-Americans and Latinos now account for 24 percent of the population, up from 17 percent in 2000. This increase could dramatically alter Suffolk’s political landscape.

But African-Americans and Latinos typically vote less than their white counterparts, and thus are often neglected by elected officials. Political parties, meanwhile, focus mobilization efforts on voters who almost always cast ballots, which can compound the problem of low minority participation. When campaigns fail to contact infrequent voters, they accept most citizens’ apathy and, especially in communities of color, reinforce their powerlessness.

So how can advocates for these minority groups increase voter turnout in 2012?

A close examination of Suffolk’s November 2011 election reveals one answer. In particular, results from the Town of Islip show that targeted, nonpartisan voter mobilization can begin reversing civic disengagement, even where you’d least expect it. 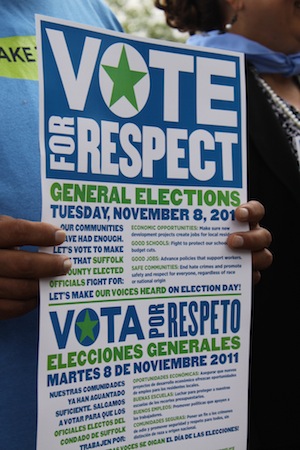 While local candidates apparently targeted the party faithful, the Civic Engagement Table focused on infrequent and new voters in often-neglected districts. To mobilize residents, we contacted them repeatedly through door-knocking, phone calls and mailings. As a nonpartisan organization, we contacted voters irrespective of party affiliation.

Did our strategy work? Just ask Darlina Sánchez. A Central Islip High School student, she joined several schoolmates to knock on residents’ doors. Still too young to vote herself, Sánchez is proud that she convinced her neighbors to head to the polls.

Her work and that of many other Central Islip and Brentwood residents delivered results: Before Election Day, the Civic Engagement Table’s canvass received more than 6,400 commitments to vote from people who our data indicate otherwise probably would not have cast ballots.

And, compared to the last comparable election in 2007, the number of votes cast in Central Islip and Brentwood increased by a remarkable 16.5 percent. While part of this spike was due to the two parties’ efforts in a competitive town supervisor race, our data show that infrequent voters accounted for much of the increased turnout.

Meanwhile, in the Central Islip and Brentwood districts that we targeted, the opposite was true: The larger the population of color, the greater the increase.

Our data show that even infrequent voters in working-class communities of color will respond to targeted mobilization efforts.

In 2012, the challenge for those who value civic engagement in marginalized communities—but do not pick horses—is how to expand voter mobilization. The key will be whether the community organizations that serve Long Island’s ethnic and racial minority communities join together and expand voter engagement.

The 2011 turnout results remind us that there are clear ways for these groups to reach out to, and motivate, voters in working-class communities of color. In the competitive elections we’re likely to see in Suffolk this year, these voters could make the difference.