Jose Hernández, a 20-year-old Salvadoran immigrant from Westbury, could have used his free time in the morning to sleep in – he typically works the night shift – but instead he makes his way to a little yellow classroom on Post Avenue in Westbury one Tuesday morning in April.

He’s heading to an English as a Second Language class at the Westbury Language Center, which was opened 10 years ago and serves upwards of 300 predominantly Spanish-speaking immigrants.

For Hernández, as with many other students, the classes represent more than a means to improve his conversation skills: Knowledge of English translates into better job opportunities.

“I used to be a busboy,” Hernández says. “Now I’m a waiter. I used to have two jobs; now I have only one. I learned to speak English so I can earn better money and I don’t have to work too many hours.”

The center is an important steppingstone for immigrants seeking better job prospects and the chance to become citizens, and students.

Hernández attends Wilmer Guerrero’s Level 7 intermediate class, which meets for two hours on Tuesdays and Thursdays at 8am. The center’s program consists of four hours of school and five hours of homework each week. It takes nine levels to complete the program, with each level spanning three months, at a cost of $160 per level. Students learn the grammar, vocabulary, pronunciation, reading, and writing that are essential for successful daily life in the US. 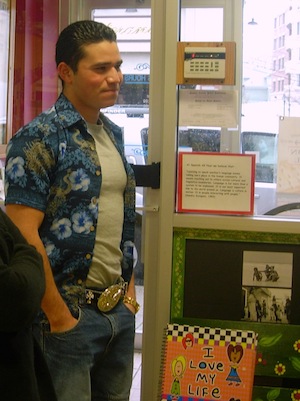 Hernández, during a practice drill.

Most of Guerrero’s students have already picked up some English at work.

“I work every day with American people,” says Leonel Santos, a Honduran immigrant. “I help customers because I am the manager…What I do is when my general manager is speaking with somebody, I hear and I listen to him, what he’s saying. And I have learned a lot.”

Students sought the school for better economic prospects, both for themselves and their families. Santos supports family in Honduras while Hernández supports his mother and two sisters in El Salvador, and helps pay one of his sister’s college fees.

“I want to make my life better, have a career and work very hard,” says Hernández, whose aspires to become a US citizen and a police officer.

“Since I came to this school I have learned a lot and I have had more opportunities,” Santos says.

Guerrero says Santos has made remarkable progress. When he started classes, “He was illiterate in his native language,” Guerrero says. “And now he speaks [English] very well.”

While teaching a future conditional verb tense during his recent Tuesday class, Guerrero also helps his students verbalize their aspirations.

The students move into the hallway, but within earshot of Guerrero, for a practice drill that requires completing each other’s conditional phrases. Teresa Garzón, originally from Colombia, cannot think of the word “drunk,” so Fernanda Yasbek stage whispers the Spanish, borracho.

“No Spanish!” Guerrero yells from the classroom.

“Do not think in Spanish,” he tells them. “You contradict your mouth with your mind.” 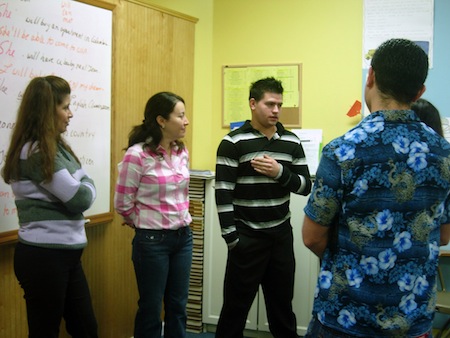 Guerrero can relate to their difficulties with the language. He emigrated from Ecuador in 1990 at the age of 26 and says he began teaching English to immigrants in the US, “to give back to the country what the country has given me.”

Guerrero also knows well his students’ non-linguistic struggles.  As the class ends, he tells them that he passed out English class flyers to immigrants waiting for work on the street at 4am in Brentwood, where he runs his own school called Trails to English.

“I was wondering, if they only knew how to speak English well, they might not be in the conditions they’re in,” Guerrero says of the workers. “The language made a big difference to me.”