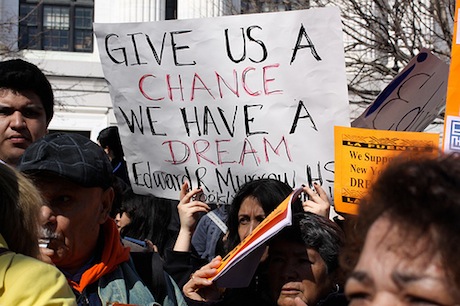 Students at a March rally in Albany for the New York DREAM Act. (Credit: Ted Hesson)

Yesterday, the New York State Assembly passed the New York DREAM Fund, a bill that would set up a commission to raise private scholarships for the undocumented.

This is nice, but it does not give undocumented students equal access to state aid. There is also no guarantee that the New York DREAM Fund will ever raise any money.

A lot of advocates were disappointed that the Assembly chose to proceed with voting on this bill, while not taking up the New York DREAM Act, which would remove discriminatory roadblocks that keep undocumented students from receiving state financial aid.

According to Chung-Wha Hong, executive director of the New York Immigration Coalition, the Assembly should immediately “pass the DREAM Act, which would open up the existing Tuition Assistance Program to all students.” She also called on Governor Andrew Cuomo to publicly announce his support for both the DREAM Act and the DREAM Fund.

“Three other states, Texas, California, and New Mexico, have expanded the state’s tuition assistance program to all students, regardless of immigration status,” Chung-Wha Hong says. She added that “New York needs to send a clear, unqualified message that reaffirms its commitment to our American values of opportunity and equality,” as a counter to the message of exclusion being proclaimed by states like Alabama and Arizona.