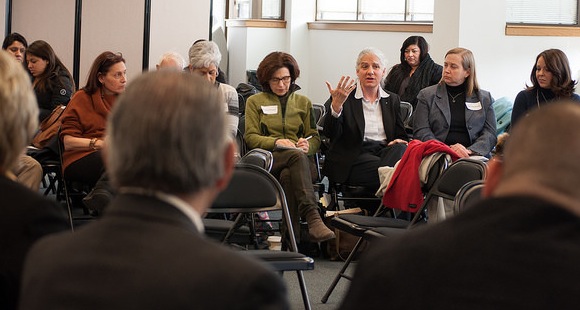 On February 26, Long Island Wins co-hosted a summit on immigration with Hofstra’s Center for Civic Engagement called Long Island at a Turning Point—It’s Everyone’s Opportunity. If the summit was any indication, Long Island is truly at a turning point not just for the issue of immigration and immigrants but for all Long Islanders.

The event was an overwhelming success with more than 300 people who turned out to discuss the issues, share ideas, and develop action steps as a way forward to ensure that Long Island is an inclusive community utilizing the opportunities that President Obama’s executive actions on immigration (administrative relief) will bring for the tens of thousands of Long Island immigrants who these actions will benefit.

The summit began with a breakfast with keynote speaker Michael Dowling, President and CEO of North Shore-LIJ Health System. Dowling, who emigrated to the U.S. from Ireland when he was 17 years old, spoke about the vital role that immigrants play in our communities, their struggle to fit in, and why immigrants today come here for the same reasons he did decades ago—for a better life.

After an opening plenary, attendees went to their choice of seven breakout sessions. Each covered an important aspect of immigration—education, healthcare, immigration law, media, economy, government, and community organizing. The goal of these sessions, after interactive discussions of the session’s issue, was to develop three action steps that will be incorporated into a post-summit strategy. (We’ll outline the action steps from each group and share them with you in a series of articles on our website in the coming days.)

The energy at the event was palpable. Many attendees expressed genuine enthusiasm and appreciation for having an opportunity to learn about the immigration issues facing Long Island’s immigrants and what our community can do to create opportunities and meet the challenges that will affect those who will benefit from administrative relief.

Feedback from the attendees highlighted the desire for more knowledge, data, and facts, as well as for tools they can apply in their work. If there was one common shortcoming, it was lack of time. People wanted to spend more time in the sessions. Many wanted to continue the conversation beyond the summit—they want to be involved.

So what’s next? We plan to develop working groups for each session to follow up on the action steps and continue the dialog. And we’ll create strategies to keep connected with the summit collective and build on the work we’ve now started.

I want to give a very special thanks to Hofstra’s Center for Civic Engagement for being the perfect summit partner. I especially want to thank Hofstra’s President Rabinowitz and Provost Berliner for their vision and leadership on the issue of immigration by enabling us to host the summit at Hofstra. I would like to extend a very sincere thanks to Michael Dowling for being our keynote speaker at the breakfast. And to all the speakers, facilitators, my incredible staff, and the 300-plus attendees who showed great compassion, resolve, and dedication to this issue. It was because of all of you that this summit was the success we hoped it would be.

This is the beginning of something huge. Stay tuned to our website and be sure to sign up for our e-newsletter for more information and updates on this as it develops.