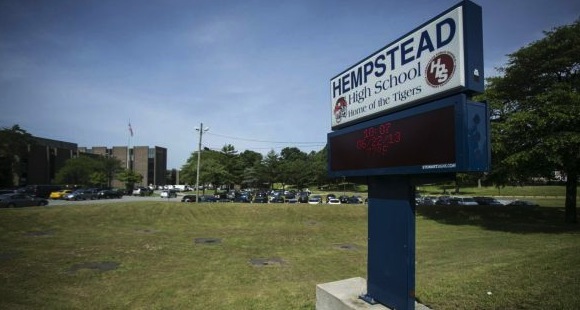 Hempstead school officials named in a recent audit that revealed unsound fiscal and administrative practices should be investigated by Acting District Attorney Madeline Singas, advocates said in a press conference on Tuesday.

The school district has been under investigation since the summer when then-DA Kathleen Rice seized voting records and machines following a disputed board election. Attorney Frederick K. Brewington, along with community leaders and members of New York Communities for Change (NYCC) and The Corridor Counts, said the DA and State Attorney General Eric T. Schneiderman should conduct a separate investigation based on information from an audit by New York State Comptroller Thomas P. DiNapoli, which was released last month.

The audit looked at records and procedures from July 1, 2011, through March 31, 2013, and found the district overpaid its superintendent by tens of thousands of dollars, hired staff to positions for which they were not qualified, and paid almost $100,000 to a vendor whose duties could not be explained.

The district also failed to screen and provide services for some special-needs students, and routinely made decisions “in the shadows” without input from parents or teachers in the district.

Shams Tarek, a spokesman for Singas, told Newsday, “We are well aware of the comptroller’s report and our investigation into the school district is ongoing.”

Singas was sworn in Tuesday to replace Kathleen Rice, who was elected to the U.S. House of Representatives in November.

Hempstead School District has been the source of much controversy after long-time board member and former board president Betty Cross allegedly surreptitiously defeated challenger Maribel Touré. Cross was removed from her post by the New York State Education Commissioner and was later soundly defeated by Touré in a special election in October that made Touré the first Hispanic board member in the district, which is nearly 60 percent Hispanic.

The school was also under fire for illegal enrollment practices after it was discovered that at least 34 Hispanic students, some of them newly arrived children from Central America, had not attended classes for more than a month after the start of the school year. The children have since started classes, but the community is awaiting a formal plan for how they will make up for the lost time.