The stretch of Sunrise Highway in Moriches was largely open in the pre-dawn hours of Saturday, August 6, when an unmarked Suffolk County Police Department sedan rifled by at an estimated 90-100 mph.

For reasons presently unknown, 57-year-old Det. Sgt. Robert Reecks—a longtime commander of the Suffolk hate crimes unit—drove off the road and crashed into a concrete abutment. The car was wrecked, according to a motorcyclist who witnessed the accident. “He hit that abutment and it just disintegrated,” the witness told Newsday. By the time a passing paramedic reached the scene, Reecks was dead.

Reecks will be laid to rest this morning, leaving behind a record of service that drew praise and, at times, controversy.

Undoubtedly, the former hate crimes unit commander will be remembered as an accomplished leader within the Suffolk police department and one of a handful of black sergeants.

He’ll also be remembered for his professionalism. On several occasions, I called him for comment on subjects that might have provoked anger from less level-headed Suffolk officials. Reecks didn’t take such inquiries personally, once telling me, “Mr. Hesson, you have your job and I have mine.”

But Reecks also faced criticism for his handling of hate crimes; specifically those crimes perpetrated against Latinos and undocumented immigrants in Suffolk. When Ecuadorian immigrant Marcelo Lucero was attacked and killed in 2008 by a group of teens who were seeking out Latino victims in Patchogue, national media and advocacy groups turned to Suffolk officials, including Reecks, for answers.

For years, though, few answers were forthcoming.

News reports, many of which were compiled in a report by The Southern Poverty Law Center, showed that a host of seemingly hate-motivated crimes against Latinos had gone unreported in the decade leading up to the Lucero killing. But Reecks, along with Suffolk County Executive Steve Levy, insisted that a problem didn’t exist.

That wasn’t enough to satisfy the federal government. In October 2009, the U.S. Department of Justice launched an investigation into discriminatory policing against Latinos in Suffolk.

“I welcome an opportunity to sit down with the Justice Department and tell them what we do to handle hate crimes and to dispel the rumors and misinformation that’s out there,” he told Newsday. “We have very, very comprehensive policies in place and they were in place well before the Lucero murder.”

But at some point, the pressure of the investigation began to expose fissures between Levy and Reecks over who was responsible for inadequate hate crime policing.

That rift became public in early January when Commissioner Dormer appointed a higher ranking officer to the hate crimes unit, making Reecks second-in-command and ending his 13-year run as the head of the unit. Shortly after the move, Reecks resigned from a county hate crime task force composed of Suffolk community leaders.

Then, in a bombshell interview with Newsday columnist Joye Brown, Reecks said that Levy and his administration had worked to whitewash hate crimes since taking office, and hampered his ability to effectively command the unit.

According to Reecks, the Levy administration at one point decided that all hate crime communications should be routed through the county executive’s office, where they were often sanitized of language related to such crimes. By hiding hate crime information from the public, Reecks said, Levy made it difficult for the unit to procure leads.

In addition, Reecks told Newsday that he had spoken with the Justice Department, presumably about the aforementioned claims. Newsday never followed up on Brown’s column.

Levy fired back at Reecks with a sprawling 1,400-word press release that accused the former hate crimes commander of everything from incompetence to a basic inability to understand the New York State hate crime statute. According to Levy, Reecks’ statements were “replete with falsehoods and devoid of numerous crucial facts.”

The war of words between two of Suffolk’s top officials on hate crime led our organization, Long Island Wins, to join a coalition of immigrant rights groups and leaders to call for a more comprehensive Justice Department investigation that would look closely at both Levy and Reecks, and investigate the claims made by both parties. 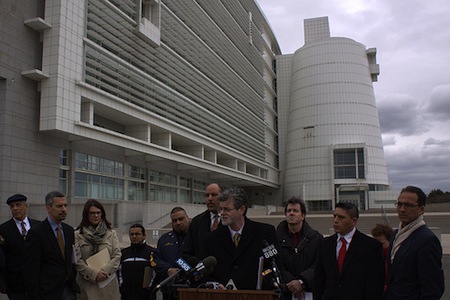 A coalition of immigrant rights leaders hold a press conference after a March 2011 meeting with the U.S. Department of Justice Civil Rights Division. (Credit: Ted Hesson)

That investigation is still ongoing, according to a Justice Department spokesperson. I emailed the spokesperson and asked whether Reecks had been interviewed again since the call for increased scrutiny of Suffolk leadership, but I have not received a reply.

Meanwhile, police are investigating the cause of Reecks’ fatal car accident; thus far, there’s been no evidence put forward to explain what happened that morning. One thing is clear, however: Det. Sgt. Reecks was under a substantial amount of pressure.

After his death, Rita Reecks, his widow, acknowledged that work had been “stressful” for the former unit commander, telling Newsday “he was getting very frustrated with the job.”

We may never know what caused the accident that took Reecks’ life. But there is still time to answer the questions about his work on the hate crimes unit.

The accusations put forth by Levy earlier this year wounded Reecks’ reputation—30 years on the force, recast in a light of ineptitude. Those accusations need to be investigated, not only for the sake of Reecks’ reputation, but so that the Justice Department can push for meaningful changes related to hate crime policing in Suffolk.

Reecks has passed away; Levy will be leaving office in 2012, tainted by corrupt fundraising tactics. But Justice Department officials still have the obligation to make meaningful recommendations to the county, so that the officials who replace Levy and Reecks will be able to avoid the same mistakes.