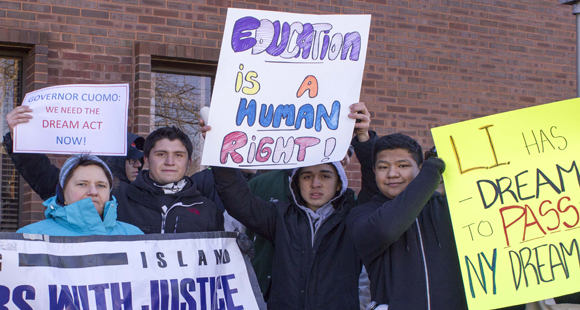 DREAMers on Long Island continue their efforts in getting support for the New York Dream Act, a legislation that will allow undocumented students to apply for state aid to pay college tuition.

A group of seven organizations signed and sent a letter last week to Senate Majority Leader John Flanagan, from Long Island, urging him to support the legislation this year.

“The number of immigrants on Long Island has doubled over the past 35 years. Immigrants have contributed tremendously to the economic and cultural development of our region,” DREAMers explained in the letter. They said their contributions could only be magnified if undocumented youth have the same opportunities to receive a college education as their peers.

The New York DREAM Act is currently included in Governor Cuomo’s 2016-2017 budget proposal. The State Assembly has also included it in its budget proposal. But the State Senate, as it has done it since 2011 when the bill was first introduced, is not supporting the legislation.

“Having access to a college education is essential to the future of our young people. The NYS DREAM Act will help immigrant youth gain the skills, knowledge and experience they need to contribute to our society and our economy,” said Cheryl Keshner, of the Empire Justice Center.

Currently, other states like Texas, New Mexico and California have passed their version of the DREAM Act. Senator Flanagan’s support is crucial to the passing of the bill since Long Island currently holds 22% of the political power in New York State, according to advocates.

According to the Office of the State Comptroller (OSC), the cost of extending eligibility for State financial aid to undocumented students is less than two percent of the total TAP budget, a small price to pay for giving more than 8,000 undocumented students a chance to go to college, graduate and continue contributing to the economy of our state, according to a statement from the Long Island DREAM Act Coalition.