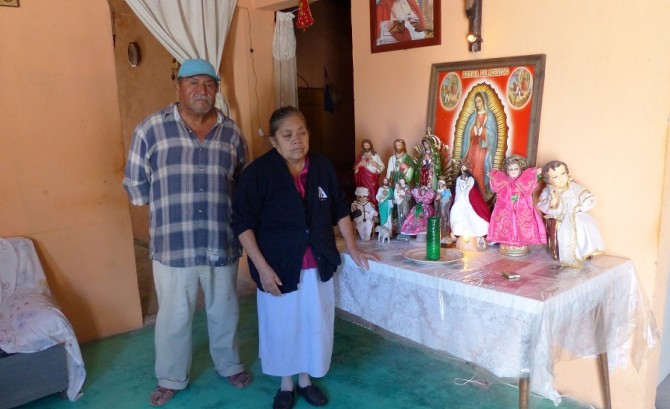 The following article originally published in Diario de Mexico, translated and republished by Voices of NY.

On Tuesday, Nov. 8, on Election Day in the U.S., Antonino Saulo called, from his Bronx home, his mother Lourdes María Martínez, in Zapotitlán Salinas, Puebla. That night, the mother said, they cried in anguish for Donald Trump’s win, feared about the future, and prayed to San Martín Obispo, the town’s saint.

“Fear crossed the border. It is felt not only in New York but also here in Puebla. My children fear deportation, but do not want to come back. There are no jobs here; there is no way to make money. Some buildings were constructed, but nothing else. They have no assets in this town,” said Lourdes. “I don’t want to see my children locked up in detention centers. I watch the news and it’s pretty ugly, there is a lot of abuse. Trump said he will deport only 3 million, but my children are afraid of the raids.”

Lourdes, 58, is one of hundreds of mothers in Zapotitlán Salinas who are fearful of Trump’s anti-immigrant cabinet. Migration to New York from this desert area in the southwest of the state of Puebla dates back to the 1970s.

“Only women, the elderly and children remain here. Young people go to New York once they’re old enough to decide. Others are starting to go to Los Angeles and Denver,” said Lourdes.

The town, with a population of 2,637, is one of the more impacted in the Puebla state by the migration of youths, both men and women. Some of its residents call it a “ghost town.”

The president-elect’s anti-immigrant rhetoric and threats of mass deportation are not stopping teenagers and youths from migrating; mothers, however, are afraid that the Trump administration will toughen up border security.

“Kids keep leaving, even though there is a lot of talk here about Trump and his hatred of immigrants. They leave because there is no future here for them. They tire of so much poverty; they’d rather risk their lives than keep living in misery,” she said. “Our immigrants will now be harassed by drug lords and ‘la migra.’ There are many who fail to cross the border and come back saying that they were extorted by ‘narcos.’ Now, with Trump and his wall, everything will be worse.”

The scorching noon sun stifles Lourdes María, a mother whose life has been marked by poverty and farewells. She walks slowly by the empty, dusty cobbled streets of Zapotitlán Salinas, the same ones her son Antonino Saulo walked as a child, selling wild fruit door to door.

Nino, as Lourdes calls him, migrated to New York City two decades ago. His aunts left in the late 1980s and in a few years saved enough to build houses and establish businesses, she said.

“My kid got enthralled by New York one Christmas, when my brothers sent him a really beautiful toy, with lights and all. Back then, there was nothing like that around here. There were no two-story houses here until the migrants started sending their dough,” said Lourdes. “Nino grew up with the idea that New York is the place to make good money. We were always poor; we didn’t even have food on the table. My kid tired of going hungry and that’s why he went to meet his uncle all the way in the Bronx.”

Lourdes can’t remember the exact age her oldest child was when he said goodbye on a March dawn, determined to cross the inhospitable Arizona desert border, accompanied by other teenagers from Zapotitlán Salinas.

“He was still a kid, maybe 18. The only thing I know is that he left, never to come back. Then, his brothers followed, one after the other. I have five children, the four men left and the girl is the only one who remained here,” she said with resignation.

Miguel Cabrera, 62, lives in San Antonio Texcala, a small town of 1,076 residents that is part of Zapotitlán Salinas. In the roadside town, ostentatious houses owned by migrants stand out among the humble dwellings of shepherds, peasants and quarry workers.

Most families work on the artisanal elaboration of onyx and marble, but the daily minimum wage of 80 Mexican pesos (US$3.84) is not enough to secure a decent life.

“Deported migrants come back to the town to work in the quarries for a starvation wage. It is very saddening to see them without a future, doing the same job they did before leaving. Some of them start a business and build their houses, but they barely make enough to survive. Life in Mexico is very, very tough,” said Cabrera. “We the parents of migrants are fearful for the future if Trump decides to fulfill his threat of mass deportations. We think a lot about what the deported migrants will do to earn a life here in Texcala and Zapotitlán. We are all very anguished; you can feel the despair in our towns.”

“You can feel the frustration. He does not understand that our children are making the United States prosper with their hard work. The only thing we can do is pray for Trump not to separate families; we can’t do anything else. We feel as if our hands are tied,” said Cabrera.

Ángelo, who lived in the U.S. as an undocumented for 26 years, waited for 24 months in Puebla before going back to New York in April 2016, as a legal resident, after receiving overwhelming political and community support. Thousands signed a petition for the immigration authorities to allow Cabrera to reenter the U.S.

Cabrera got a degree in political science and a master’s in public administration, and in 2001 founded the Mexican-American Students Alliance (MASA), an organization that promotes education among underprivileged New York families.

“Now my son has papers, but he suffered a lot. He suffered everything an undocumented migrant has to suffer. I haven’t stopped feeling the same way as other parents feel about their undocumented children in the U.S. Trump does not respect any immigrant. He is a man without compassion,” said Miguel.

“What’s going on in the U.S. affects us directly here in our town. The new president does not understand the fear he has sown beyond the border. I feel everybody in Latin America feels the same.”