Last week, President Obama held a White House meeting with a high-profile group of immigration reform supporters and told them he wants legislation passed soon, a sign that the president is ready to renew the legislative push for reform.

But as I pointed out last week, many advocates believe he should be focusing on administrative actions he can take that would significantly improve the lives of undocumented immigrants. Since opponents of comprehensive immigration reform control the immigration subcommittee in the House of Representatives, these administrative measures have one single great advantage: They can actually be accomplished.

Over the next few weeks, I’ll look at what President Obama can do on his own without needing the support of the House Republicans. Generally, these actions will help undocumented immigrant youth, immigrant workers, and immigrants who might have committed minor legal infractions.

First up is a look at relief for young people who would have been eligible for the DREAM Act.

The failure of the DREAM Act to become law last year was devastating to many undocumented immigrants who were brought here as children by their parents. The bill has virtually no chance of passing in 2011, but there is a simple action President Obama can take to help Dreamers across the country.

The president has the power to grant individuals or whole groups of immigrants something called “deferred action.” Under a deferred action program, President Obama could designate anyone who would have been eligible for the DREAM Act to come forward, undergo a background test, and, if found to have a clean record, allowed to register with Homeland Security.

Dreamers granted this temporary assistance would not become permanent residents unless Congress passed the DREAM Act, but they would have a period of one or more years during which they would not face deportation so long as they did not commit a crime. 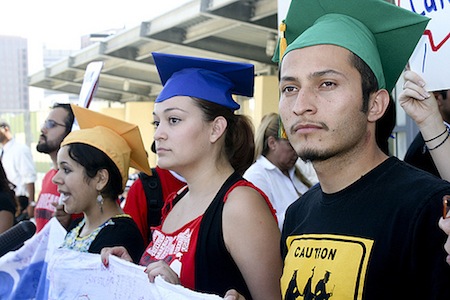 On the down side, if Obama grants deferred action to Dreamers, it could be revoked by the next president.

Other negatives abound.  The action would not serve as a first step towards a green card or citizenship, and it would require the grantee to give information to the Department of Homeland Security that could be used later to initiate deportation proceedings if the program ends.

On the positive side, a mass grant of deferred action could pressure Congress to pass the DREAM Act. If hundreds of thousands of young people are able to come out of the shadows, we may find that Congress does not have the heart to deport them.

Click here to support the “Send a Pen” campaign by the New York Immigration Coalition, calling for President Obama to use his executive power to take fix aspects of our broken immigration system now.

Here’s a video explaining the campaign:

Feature image courtesy of The White House and image of Dreamers courtesy of Antonio Villaraigosa via Flickr.