President Obama took a stand last Friday to stop deporting certain young people from the United States and allow them the right to live and work here. Behind his pronouncement was a simple idea—that deferred action for a certain class of young people was “the right thing to do.” But he didn’t arrive at this thought overnight. Undocumented youth organizers, who have been organizing for this change for more than a decade, were the real catalysts for this change.

No one person or organization deserves credit for a powerful movement that has spawned multiple locales and geographical archipelagos. Undocumented youth took to the streets, came out and proclaimed themselves as undocumented and unafraid, conducted civil disobedience actions in offices and ICE buildings and challenged the system at every turn. We were adamant that we are a part of America, not leaving and no longer willing to be ignored. We created social and political spaces, took politicians to task and stuck by our principles of holding both Republicans and Democrats accountable to immigrant communities. Every single person who came out of the shadows and worked on this campaign deserves to celebrate and give themselves a pat on the back.

But even after the announcement, many undocumented youth organizers continue to be skeptical and rightly so. After all, this is not an order from the president, who has deported over a million people. It is merely a memo from DHS Secretary Janet Napolitano, quite similar to the unsuccessful memo issued by John Morton last year, which resulted in a reprieve of only 1.5 percent of cases in deportation proceedings. Attorney Dave Bennion lays out the problems with the new memo, noting that those who are denied deferred action may still be subject to deportation proceedings and far too many people will be excluded for simply having a felony or misdemeanor, terms that Immigration and Customs Enforcement is choosing to define much more broadly in the implementation of this policy. Additionally, the fact that the process is highly discretionary means that there is no way to appeal even illegitimate denials.

However, if executed right, this new deferred action plan for a class of young undocumented people promises to be a pilot program for how the government would carry out the implementation of any future legalization program. It also raises questions as to why the federal government cannot grant the same relief to same-sex binational couples, many of whom have lived here for a long time and face separation from their homes and their US-citizen partners. 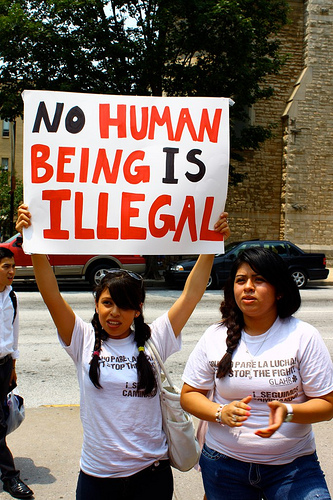 A June 2011 rally for the DREAM Act in Georgia. (Credit: j valas images via Flickr)

We have won a tiny victory—a simple reprieve—but the war is far from over. My own personal thoughts go out to everyone who has aged out, everyone the Obama administration has deported ruthlessly, everyone who has grown tired of waiting for their life to begin and left us, and everyone who is still languishing in detention without hope. Additionally, undocumented youth do not live single-issue lives and immigration is not our only problem. We are personally affected by a slow economy, a pitiful healthcare system and an education system that leaves far too many of us behind, among a myriad of other issues.

In the meanwhile, I’m still fighting deportation proceedings—not just my own, but that of many worthy clients who come through the doors of America on a daily basis, yearning to live out their dreams. When the celebrations die down, I’ll still be here, fighting for their dreams. That is also, the right thing to do.