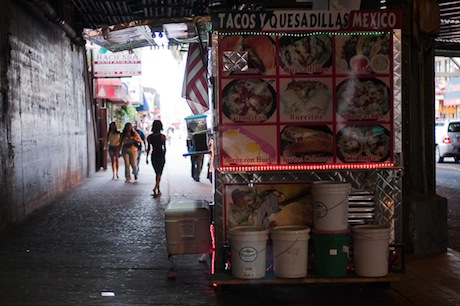 Voices of NY recently showcased reporting on street vendors’ protestsagainst heavy fines from the police. In this story, translated from El Diario La Prensa, immigrant street vendors complain that they endure a kind of “modern-day slavery,” where they must pay most of their profits to rent vending licenses that they can’t obtain themselves:

According to Queens activists, a virtual “mafia” that rents out licenses for food carts has Hispanic vendors toiling long hours and earning little money.

It is an open secret that people who have obtained licenses to operate food carts rent them to immigrants. Many of them are undocumented and don’t speak English, which makes it more difficult for them to fulfill the requirements to get a license.

“It makes me really angry that we have our own business, but we give our earnings to somebody else,” said Saúl Vázquez, 26 years old and originally from Puebla, Mexico. He now helps his sister, Belén Vázquez, 24, who sells fruits and vegetables seven days a week on Junction Boulevard in Queens, renting the food cart from a Honduran woman known as Silvia.

“For me it’s a mafia, like a monopoly, because she doesn’t only rent to us, but to other people here in the neighborhood,” said Vázquez.

“They rent the food carts out seasonally, sometimes for six months or only for the summer,” said Vázquez, who started working with his sister after a period of unemployment. “The prices vary. My sister rents it for six months and has to pay $6,000. I think it’s unjust that we come here to work very early in the morning, we buy the products, and then we sell them in order to pay her, without earning a thing.”

Besides the high price of renting the food cart, Vázquez said, vendors also have to cope with police harassment.

“At the end of the day, it’s chaos working here,” said Vázquez. “Every once in a while the police come by giving out ‘tickets’ for one thing or another. In the past, they gave my sister a ticket for not having a permit, but she already got it.”

Just like the Vázquez siblings, thousands of immigrants are compelled to rent food carts in order to sell their products, and they become victims of abuse perpetrated by people who are able to obtain the licenses.

“Not only do clients tell me that they do rent licenses, but that the price of the rent is also very high,” said Ernesto Cury, an accountant who helps food cart vendors.

“Many people will not talk about what happens out of fear, and because they need the work,” he explained. “Moreover, it’s very difficult to confirm because the people that rent out the food carts don’t accept personal checks as payment, and the vendors have to pay in cash.”

“The vendors are not doing anything wrong,” Cury said. “The people that avoid paying taxes and don’t work are the ones who own the food carts.”

According to Cynthee Cortés, a project organizer for Small Businesses United, a program of Make the Road New York, vendors have turned to the organization to complain about the high price of rent and to find out information about how to obtain a license, but they face obstacles when they themselves try to get one.

Cortés said that some of the barriers are a lack of proficiency in English, and in some cases the lack of legal status, which forces vendors to rent food carts.

“Many of them can’t pass the exam that is given in English, and as they don’t read or write the language, they don’t pass the test, and each time they take it they have to pay $50,” Cortés explained. Another hindrance, according to Cortés, is that the city has a limited number of licenses and is no longer issuing them to new applicants.

“Many people don’t want to speak up because the city doesn’t allow them to rent these licenses,” said Cortés. “Now, the city requires that the person applying for the license be present, or that the person has an employee that he or she pays for the hours the employee works.”

In the same vein, Rafael Samanas, executive director of Vamos Unidos, an organization that advocates for the rights of Latino street vendors, said that the rent for food carts is very high, but the real problem is the lack of new licenses.

“The problem isn’t so much the price of renting the food carts, but that the number of permits has not increased in the last 30 years, so many people take advantage of the situation,” said Samanas. “The city charges fines of up to $1,000.”

The NYC Department of Health and Mental Hygiene verified that it is illegal to rent out licenses and permits. In order for a person to obtain a permit, he or she must have a license to sell food from a vehicle, which requires the applicant to have taken and passed a course on food safety, and to have a tax identification number or a social security number. Moreover, the applicant must be placed on a waitlist, from which the city chooses those who will receive licenses.

A spokeswoman for DOHMH said that anyone can apply for a license in New York City. Each person receives only one license and one permit. Up until now, the city has issued a little shy of 20,000 licenses, which is the maximum number that the city grants.

Eduardo Giraldo, ex-president of the Hispanic Chamber of Commerce of Queens is a critic of the “large number” of food carts on the streets in Queens, because he says they affect stationary businesses in the borough.

“It works like a mafia,” said Giraldo, who blamed local elected officials for not intervening. “How is it that they can park three or four carts at the intersection of Junction Boulevard and Roosevelt Avenue, and every day they manage to get space in the same place as parking meters? That is completely illegal.”

Although Giraldo disapproves of the number of food carts allowed, he called the system of renting out licenses “modern day slavery.”

“These people work between 12 and 14 hours and they earn between $600 and $700 a day, but they turn over those earnings to the owners of the food carts,” he said. “It is modern day slavery and the government allows it.”

“Why do they allow it in Elmhurst, Jackson Heights, Corona and the surrounding areas?” he asked. “Why not in Astoria, Rego Park or the commercial center of Queens, where they recently removed food carts?”

This English-language translation originally appeared on Voices of NY.