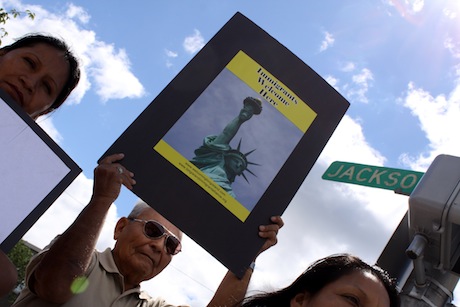 Yesterday, I attended a press conference in Hempstead to launch an education campaign about the misnamed Secure Communities program. The event brought to mind a question on the civics test for citizenship. I teach civics at CARECEN, so I know most of the questions by heart. The test is given by the Department of Homeland Security, the same federal department that runs Secure Communities. Here is question 42:

42. Under our Constitution, some powers belong to the states. What is one power of the states?
▪ provide protection (police)

Police protection is not an exclusive state power—think of the FBI—but the Constitution reserves most police powers to the states so that local communities can decide what makes them secure. States like New York have repeatedly said that using local police as adjuncts for Immigration and Customs Enforcement does not improve the security of our communities because it drives a wedge between law enforcement and immigrants.

I think that the Department of Homeland Security flunks its own civics test when it bullies states into participating in this flawed program.