President Obama’s directive to affirmatively issue deferred action to DREAM Act-eligible youth is fostering a new generation of “undocumented and unafraid” students who will be spared from deportation. But it isn’t just young people who are coming out in droves. It is also our parents.

At the National DREAM Graduation in Washington, D.C., which was the largest gathering of undocumented students ever, Alejandra Pimentel, an undocumented mother, addressed an audience of undocumented youth. She spoke about fighting her son’s deportation, and shared some great words with the young people in the room, telling us that her dream was our success and that we should never give up. She told us that because of us, she was undocumented and unafraid.

But Pimental is not the only mother who is coming out as undocumented and unafraid. Across the country, at community gatherings, workshops, and town-halls about the new deferred action program, undocumented parents are showing up in large numbers with their undocumented and US-citizen children to gain some understanding of what the new Obama announcement does for them.

This bold new coming out by undocumented parents is ironic given that young undocumented immigrants have often been accused of being selfish for advocating for the DREAM Act, as opposed to comprehensive immigration reform. Maybe we have always been right. Maybe piecemeal immigration reform is the way to go, adding ingredient by ingredient till everyone can share in the pie. Undocumented parents coming out of the shadows to seek some sort of status for their kids certainly cements our claim that our dreams were never selfish—they are in fact, tied to the dreams that our parents had for us in bringing us to this land of opportunity. And deferred action for Dreamers is emboldening them as much as young people into coming out of the shadows.

I was at J.E.B. Stuart High School in Northern Virginia last week, helping my law firm conduct a workshop about deferred action for members of the community, and over 400 parents showed up to listen intently, ask questions, and seek help for their children. We stayed for over three hours and ran out of our materials. The next day, our phones at the office did not stop ringing.

While some organizations are discouraging young immigrants and their parents from seeing immigration attorneys regarding the new program, within the last week alone, we’ve told a Dreamer that he is, in fact, a US citizen, assisted someone in registering for the GED, discovered an in absentia order of deportation, discouraged a Dreamer from engaging in marriage fraud, and discovered an entire undocumented family that should have received their green cards a long time ago. An undocumented mother told me last week after consulting with our law firm that she was finally seeing light at the end of the tunnel. It is thus critical that we should straddle the fine line between warning people of scammers and notarios, while encouraging people to seek legal advice.

At DreamActivist.org, we released a FAQ explaining deferred action, which received over 10,000 downloads within a couple days. Well over a thousand people have emailed to ask whether they are eligible for the program and to request legal support for more complicated cases. For perhaps the first time, people who were not already “undocumented and unafraid” are coming out to seek legal advice regarding their immigration history, and that is a good thing that we should all encourage, especially since it is quite likely that many people qualify for far more than just deferred action. 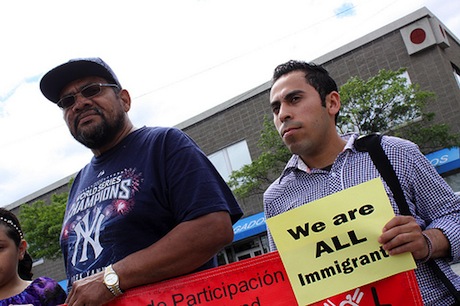 A June rally in Hempstead (Credit: Ted Hesson)
Additionally, the renewed coming out is not restricted to community forums and law firms. U.S. Citizenship and Immigration Services (USCIS) has already stated that the parents of everyone granted deferred action will not be put into deportation proceedings, so there is nothing to fear by seeking information. The government agency reports getting over 75,000 calls concerning the program. They have hired over 100 new staff to process applications, which could take anywhere from five to nine months. Despite criticism that Dreamers would take away jobs from American citizens, the new program is already creating jobs for Americans.

From undocumented and unafraid, we are increasingly becoming documented and unafraid. Immigration attorney Andres Benach has suggested that by applying and receiving deferred action, young immigrants and our parents will further integrate themselves into American society. We would have driver’s licenses, social security numbers, and jobs. We would be able to rent apartments, go to college, buy homes, pay more taxes, take care of our parents, invest in our communities, get married, and have children.

As our roots grow, it would be much harder than it is now to uproot us from America and the appetite for the social disruption of deporting us will will decrease exponentially. Hence, even if a Republican such as Mitt Romney is elected to office, it is doubtful that she or he would order the deportation of millions of Dreamers, along with our families. Congress will have to act as it did with the Nicaraguan Adjustment and Central American Relief Act (NACARA), and grant permanent residency to Dreamers living in an amorphous legal state under deferred action.

If you haven’t come out as undocumented and unafraid, come out of the shadows. The only thing you have to lose is your chains.

This column originally appeared on prernalal.com.