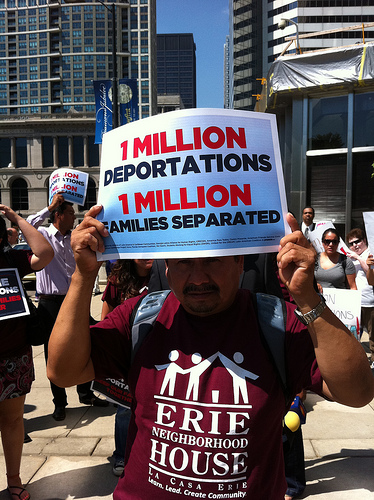 For undocumented immigrants seeking to normalize their immigration status, a policy change by the Obama administration could allow more time in the US with their families during the application process.

Currently, undocumented immigrants must leave the country before they can ask the government to waive a three- to 10-year ban on legally coming back to the US The length of the ban depends on how long they have lived in the US without permission.

The policy change will likely take effect later this year, according to an Obama administration official who spoke to the Associated Press under the condition of anonymity.

During Obama’s term in office, deportations have reached record highs, even as the number of illegal border crossings at the US-Mexico border have dropped to the lowest levels since the 1970s.

The president has faced criticism from immigration advocates and Latino leaders for heightening deportations and his support for the Secure Communities immigration enforcement program. But as the 2012 election nears, the administration has authorized several policy changes intended to ease deportations.

Under the newest change, certain undocumented immigrants applying to stay in the country will have their applications processed in a more expeditious manner:

Immigrants who do not have criminal records and who have only violated immigration laws can win a waiver if they can prove that their absence would cause an “extreme hardship” for their citizen spouse or parent. The government received about 23,000 hardship applications in 2011 and more than 70 percent were approved, the official said.

Applications for the waiver can take as long as six months to be acted upon, the official said. The new rule is expected to reduce that processing time to just days or weeks, the official added.

If enacted, this would be the second notable immigration policy shift by the Obama administration in the past six months.

In August, Homeland Security Secretary Janet Napolitano announced that the administration would review 300,000 pending deportations to identify “low-priority” cases—such as people who have lived in the US since childhood—and allow qualifying immigrants to stay in the US and work legally. A pilot program to review 12,000 cases in immigration court in Baltimore and Denver is currently underway.