The Obama administration has proposed a new process allowing spouses and children of US citizens to file for visas while remaining in the country — ending one of the most heartbreaking practices on our books.

Currently, many undocumented immigrants who are eligible for visas must leave the country in order to adjust their status. The devastating aspect of this requirement is that, upon leaving the US to have their documents processed in their country of origin, they trigger a bar against returning to the US for three or even 10 years — a Catch-22 that tears families apart and punishes hundreds of thousands through extended separation from parents, children, and spouses.

If the administration’s proposal goes through, however, it will be easier for families to avoid these bars by applying for family unity waivers. Waivers in situations of extreme hardship are available now, but the process is incredibly slow and inefficient. We’ve shared stories of those like Tony and Janina Wasilewski, who were reunited through a waiver after Janina was barred from returning home to her husband in Chicago for more than four years.

This proposal would be a huge relief for mixed-status families — it’s the kind of common-sense reform that is desperately needed. Here are the key points on how the administration’s family unity waivers would change the implementation of the bars on returning home:

In-state processing: If eligible, undocumented husbands, wives, and children of US citizens would no longer need to leave the country to process their visa application, and could instead remain in their community through the process.

Waiting while home: There is no rational reason to make a visa applicant wait for months or even years away from their family and community while their application is reviewed. The new procedure could allow spouses and children to remain united with their family members, and would not have to endure long and unequal waiting times depending on home country processing.

Unclogging the courts here: Government bureaucracy has created a backlog of immigration cases in our courts, and put up other obstacles that keep families separated for years. This proposal, along with enforcement of last summer’s DHS announcement on deprioritizing non-criminal cases, may relieve the courts and boost efficiency.

Saving time abroad: Waiver applications are often referred by US consulates abroad back to DHS offices in the US for settlement. Processing these applications stateside in the first place will allow these consulates to focus staff resources on serving citizens in foreign lands, and will ensure DHS staff develop the expertise to apply uniform legal standards to all cases.

Real relief: Those potentially eligible for family unity waiver include spouses and unmarried children of US citizens — a pool of hundreds of thousands of individuals that could be protected from forced separation from loved ones. 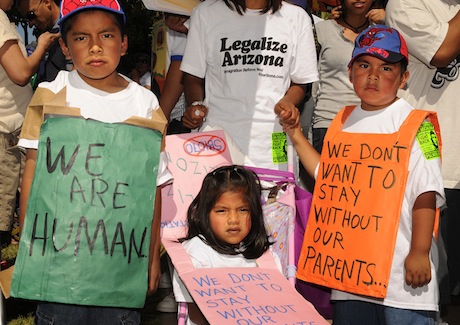 This is a great step in the right direction and we need to push for more on this announcement to ensure families can stay together. Stateside processing should be extended to spouses and children of lawful permanent residents, in addition to US citizens. It makes common sense to extend this proposal to immediate family members of lawful permanent residents, whose loved ones face the same obstacles when required to wait abroad for their visas. And if these changes go through, it will not undo the pain of separation that families have already endured -– but it could prevent hundreds of thousands of husbands, wives and children from the same experience.

Let’s start 2012 with a massive outcry of support for keeping our families together — take the pledge now.