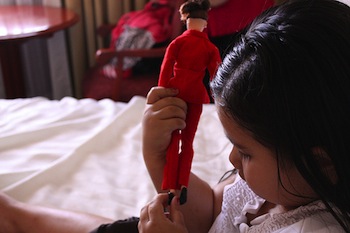 Last month, David Sperling, immigration lawyer on Long Island and a blogger for this site, took on the case of Emily Samantha Ruiz, a 4-year-old girl who was sent to Guatemala despite being a US citizen.

Sperling has since traveled to Guatemala and brought Emily back to her parents in Brentwood (I flew to Guatemala, as well, reporting on the story).

Emily’s case shouldn’t fade from the public consciousness, according to Sperling, who penned a recent column about the incident in the Huffington Post.

In one part of the piece, Sperling challenges the media to take further action:

Most reporters, especially from English-language media, swallowed the government line unquestioningly. Yes, she was given an opportunity to be reunited with her parents, but perhaps because he did not speak English that well, he misunderstood. A simple communications problem. Or he was afraid to get deported, so he sent Emily back to Guatemala. The reporters were just interested in the human-interest angle, “deported” U.S. Citizen girl reunited with parents. Happy ending. End of story.

But why didn’t the media try to resolve these conflicting accounts? I have the ID number of the CBP agent who signed off on the deportation order and a physical description of the agent who mistreated Emily. Why doesn’t anyone want to follow up and determine who is telling the truth? Although this story became huge, appearing in media outlets throughout the world, not one reporter ever asked me who the CBP agent was, or how to investigate this further.

As a youth, I vividly recall the Watergate scandal that led to President Nixon’s resignation. Enterprising reporters sniff a wrongdoing, and through tireless dedication they uncover the truth. This never happened with Emily. No one challenged the possibly false statement that CBP issued. An illegal immigrant’s word against a government spokesman. Who is going to believe the illegal immigrant?

To read the rest of the column, click here.