It was big news.

On March 11, 4-year-old Long Islander Emily Ruiz and her grandfather were en route to Brentwood after a vacation in Guatemala when their plane was diverted to Washington, DC, because of weather.

At the airport, Emily’s grandfather had problems with customs officials due to a decades-old immigration infraction, and he was soon placed in deportation proceedings. Meanwhile, Emily’s parents, both undocumented immigrants, were waiting for her to arrive at Kennedy Airport. She never made it.

Her father, Leonel Ruiz, eventually learned that his daughter – who was born in the US and is a citizen– was in the custody of the federal government.

Word got around about Emily’s plight, and media outlets like The New York Times, CNN, and USA Today all reported on Emily’s situation. After a weeklong media firestorm, Emily was eventually reunited with her parents.

Emily’s story has a happy ending – at least for now. But thousands of other children haven’t been so lucky, forcing us to confront the question: Why do we allow US-citizen children to be taken away from the only home they’ve ever known because of the immigration status of their parents or relatives?

Emily’s story is more common than you’d think. From 1998-2007, over 100,000 parents of US-citizen children were deported, forcing thousands of American children to leave for counties where they often had limited social connections or legal rights. 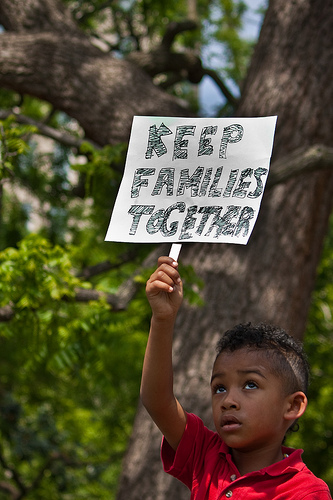 All in all, the American kids living abroad because of our immigration system could amount to a small city. These thousands of young American citizens are being sent off to countries that are often wholly foreign to them, and frequently into dire poverty.

It’s a challenge to all of us to renew our efforts to fix our broken federal immigration system, and give people like Emily’s parents the chance to earn a path to citizenship. It will make for stronger families, and a stronger Long Island.

“Emily, just four years old and a US citizen, should never have faced this confusing and frightening situation,” Israel said in a statement. “No matter what side of the immigration debate you are on, it is clear that the system didn’t work for Emily.”

Israel is right. We should have abandoned the very idea of a “second-class citizen” years ago. There’s no reason we should treat a generation of US-citizen children that way today.