Today, the Sanctuary Movement of the 1980s is known as a civil disobedience effort to help Central American refugees. What people forget is that when members of the movement were arrested, they were charged with felonies and faced long stays in Federal prison.

The Sanctuary Movement came under attack from the Reagan White House for its critique of American asylum policy and its denunciation of United States support for the death squad regimes in Central America. Ed Meese used his Justice Department to indict religious workers in Texas, and in 1985, 16 sanctuary workers were rounded up in Arizona, including Presbyterian minister John Fife and Jim Corbett, a Quaker philosopher and a leading thinker within the movement.

The arrests came after four years of break-ins, spying, and infiltration of groups critical of U.S. policy in Central America by the Reagan Administration. El Salvador was the fourth largest recipient of U.S. aid in the world, and Guatemala was the recipient of arms shipped illegally by the United States government. Reagan’s men were not going let their grand strategy for suppressing rebellion in Central America fall victim to the tenderhearted concerns of a bunch of Quakers, nuns, and lawyers. Serious retribution against those already active would forestall new recruits to a Sanctuary Movement the administration increasingly equated with terrorism.

By the time I graduated Hofstra in 1985, being an immigration lawyer defending refugees had become a dangerous proposition. Friends talked of government surveillance and threats from purported death squads operating inside the U.S. We all assumed that in taking up the defense of the rights of Central Americans we had placed the licenses we had worked so hard to obtain at risk.

I had worked my way through school driving a forklift, washing dishes, and packing paint on an assembly line. I reassured my wife Cecilia that if I had my license lifted, I was a Teamster and I could always go back to the loading dock. She asked me if my union card would protect me from being jailed like John Fife and Jim Corbett. 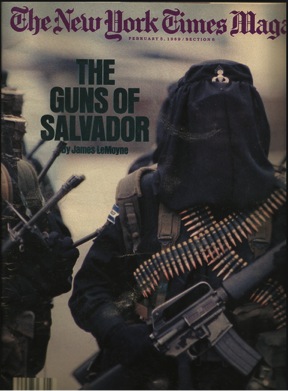