This story was originally published by EFE via El Diario La Prensa.

An estimated 3,000 non-citizen soldiers have been deported or face deportation as a result of problems with the law after their return to civilian life. Now, a veterans’ association is asking for a way out.

Formed several years ago, Banished Veterans, a group made up of former military, is asking for a legal modification that allows these soldiers to be treated the way they say they deserve.

“We ask that they recognize us as nationals, not as citizens – that’s something that we can apply for later if we meet the requirements,” said Luis Madrigal Alvarez, ex-combatant of the Vietnam War and one of the members of the group. “Just not to be subjected to deportation.”

In 1976, Madrigal Alvarez, then 17 years old, was promised automatic citizenship after his recruitment to fight in the Vietnam War.

He returned less than victorious from the war, baring the physical and mental scars of the conflict. In the years that followed, he became addicted to drugs, landing himself in jail on various occasions. Eventually, he was ordered to leave the country.

“I’ve always been treated like a citizen until one day, in 2006, they arrested me and ICE (Immigration Customs and Enforcement) informed me that I would be deported,” said Alvarez. “I tried to argue that I was a military man with honors and they told me that the law had changed to include minor offenses.”

“It was a rude awakening,” he said. “What was I going to do in Mexico at my age? And now that I’m not used to speaking Spanish?” 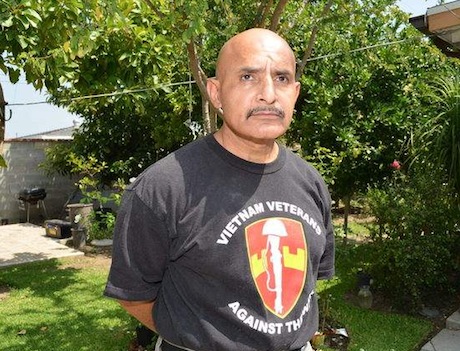 He went through an intense legal process but lost his immigration case, as well as the $12,000 needed to cover his lawyer. He later obtained his citizenship through his own efforts.

Hector Lopez, who fought in the invasion of Granada, didn’t have the same luck.

After integrating back into civilian life, he was detained for drug possession and deported to Mexico, his country of origin.

Like the majority of these veterans, Lopez says he thought that if he fought on the side of the United States, he would receive his citizenship automatically.

Even though a fast-track naturalization program has existed since 2009, some veterans were unaware that they needed to apply for it.

“We thought we didn’t need it. They told us that after six years of swearing to the American flag, that would be enough,” said Lopez via a telephone call from Rosarito, Mexico, where he currently helps others who arrive at the frontier in similar circumstances.

Lopez believes that many of these veterans suffer because they find themselves in a country that they abandoned as children, and for which they feel scarce affinity.

“They [live] in bad conditions and they don’t have jobs because they aren’t from there,” Lopez said.

Lawyer Craig Shagin, who has represented more than a dozen of veterans in deportation processes, feels it is not logical that men who have risked their lives for this country do not receive special treatment.

“The soldier doesn’t know anything [about the process], said Shagin. “The only thing that he receives as part of his veteran benefits is that he can be buried in an American military cemetery when he dies.”

In addition to the soldiers, the phenomenon victimizes families, as well. They see the devastating effect of the conflict on their loved ones and feel anger towards what they believe to be an injustice.

“I handed over my son to them good and they returned him to me sick,” said Maria Madrigal about her son Luis’ consistent problems and addiction to drugs.

And in tears, Cruz Rebolledo, the mother of Fabian Rebolledo—who fought for the army in the Kosovo conflict and was just deported to his native Mexico—begs for the return of her son and all of the other veterans who recognize their mistakes but are asking for help to stay in the United States.

“It fills me with sorrow because he was fighting for this homeland, for the United States,” said Rebolledo, while she held a portrait of her son. “Why do they treat my son and all of the others poorly? They have a right to be here now—not when they’re dead, when they bring them to bury them. [The government] should help them when they are alive here, especially when they have family.”