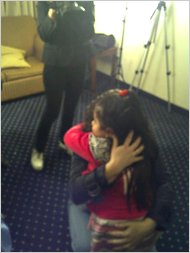 Emily Ruiz arrived early this morning at Kennedy Airport where she got a big hug from her mother. The four-year-old Long Island girl had been sent back to Guatemala by U.S. Immigration and Customs Enforcement staff even though she is a US citizen.

David Sperling, who writes for Long Island Wins, represented her throughout the process. When she cleared customs he tweeted “Mission Accomplished.”

Sperling said that a press conference will be held later today to address the issues raised by Emily’s forced separation from her parents.

Read more on this story.