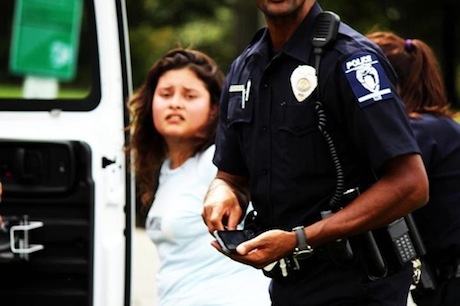 To bring awareness to the plight of undocumented youth—born abroad, raised in this country, but excluded from citizenship—activists sometimes risk their own deportation by going public with their immigration status.

Coming out as undocumented isn’t easy; one could face criticism from peers, hate mail, and, of course, the threat of deportation.

However, young people in groups like the National Immigrant Youth Alliance (NIYA) continue to risk deportation in the hopes that activism and education will help ignite policy change.

A shining example of that courage went public earlier this week when Viridiana Martinez, a 26-year-old undocumented immigrant based in Raleigh, North Carolina, announced that she and other NIYA activists had infiltrated an immigration detention center in South Florida.

During an undercover operation that spanned a month and a half, the group said that it found evidence that the Obama administration continues to deport non-criminal immigrants, despite a June 2011 commitment to use discretion in low priority cases. Likewise, the group found more than a dozen DREAM Act-eligible youth in deportation proceedings, despite the administration’s vow to halt such deportations.

In order to challenge Immigration and Customs Enforcement and GEO Group, Inc. which owns the facility, we have placed multiple NIYA members inside Broward Transitional Center to find people who are eligible for deferred action, are low-priority cases. In this one facility alone, we have found over 100 cases of people who, according to the Obama policies of the past year, should be released back to their families.

According to the information given to us by the organizers inside, there are:

—people inside Broward who have pending application for a U Visa;

—Over 60 individuals with no criminal record or prior deportations, some detained as passengers in vehicles;

—More than 3-dozen cases in which individuals are still eligible for discretion despite previous contacts with the system;

—Several cases of immigrants in need of immediate medical care, including one individual with a blood clot in his leg and another with a bullet in the spine;

Hear Viridiana Martinez speak about the detention facility in this interview with Democracy Now.

Watch a short segment based on the interview here: