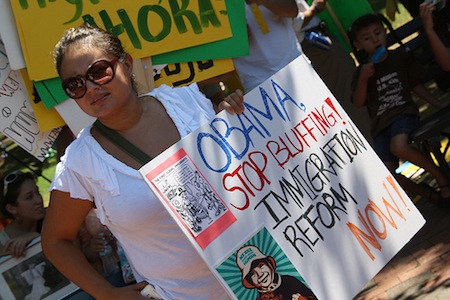 On Tuesday, Congressman Luis Gutierrez (D-Ill.) and 10 others were arrested outside the White House in a protest against the 1 millionth deportation of the Obama administration. The arrests came the day after President Obama sent a letter to Gutierrez rejecting the congressman’s request that the president use his administrative discretion to halt the deportations of young people who would be eligible for the DREAM Act—a bill Obama has said he wants to pass.

The 1 million-person deportation mark has resonated within the Latino community nationwide and is heightening disaffection by Latino voters from the president. His appearance at a luncheon at the National Council of La Raza on Monday drew protests outside the hall and chants criticizing him inside, which indicates that the Latino vote may not mobilize for him in 2012 at the unprecedented levels that it did in 2008.

Obama’s only ally in reviving Latino support seems to be the Republican presidential field. None of the candidates has yet articulated a policy towards immigration that Latino leaders consider even remotely attractive.