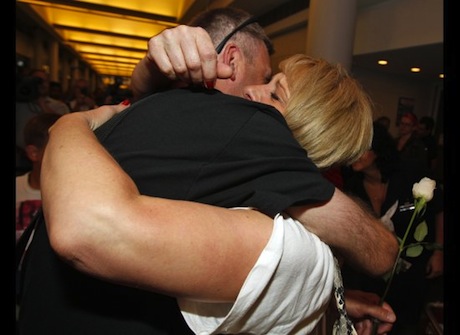 Photo via the Associated Press.

Here’s a story to start the year off right: The Huffington Post just named the reunion of a family torn apart by our broken immigration system one of Chicago’s top “good news” stories of 2011.

After four years apart from her husband and son, Janina Wasilewski returned from Poland to Chicago in August. Her deportation received national attention after the family’s story was captured in the award-winning documentary Tony and Janina’s American Wedding. Since Janina’s return, the Wasilewski family has presented the film on Capitol Hill to advocate for comprehensive reform, to save families like theirs from the pain of separation.

The Huffington Post summarizes how they chose the best stories for 2011:

Though some of these were certainly not the “biggest” stories of the year, they all reminded us that how one responds to any given reality is just as, if not more, important than the event or situation itself.

We’re making 2012 the year that our immigrant families show our strength, and remembering stories like Tony and Janina’s keep us inspired and determined to reunite more families. Share their story with family and friends by screening Tony and Janina’s American Wedding — click here to pick up the DVD of the original version. The updated version with an epilogue on their reunion with be available next month.