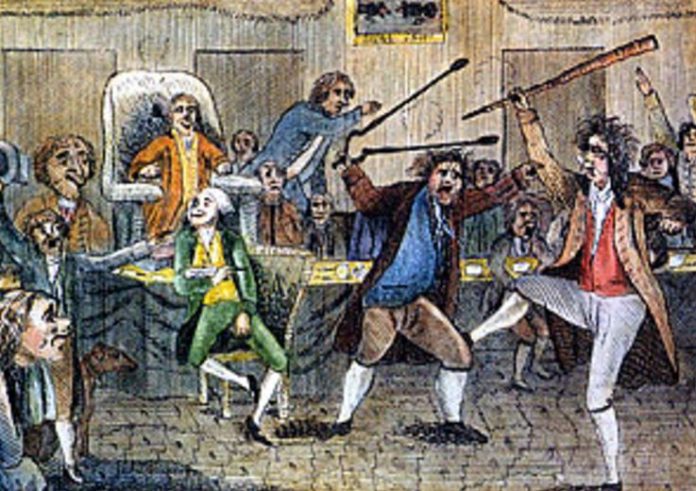 Every Fourth of July I like to write about the immigrants who help found the United States. Some were heroes, but most were a mix of heroism and pigheadedness. This is the story of one such mixed man.

Matthew Lyon was an immigrant revolutionary who was elected to Congress in 1797. Lyon was an aggressive and independent voice in early America, and he was thrown in jail by John Adams to silence him. He came from Ireland to America before the Revolution in the poorest way that a white person could.

Matthew Lyon sold himself as an indentured servant to pay for his passage to America while he was still a teenager in 1764. His father was dead, possibly executed for anti-British activities, and young Matthew had a hard time getting by in English-ruled Ireland. He worked off his unfree status and when he was 21 years old he married the niece of Ethan Allen, one of the most prominent men in Vermont. When the Revolution broke out in 1775, Lyon joined Ethan Allen’s “Green Mountain Boys” in their attack on Fort Ticonderoga on the New York side of Lake Champlain. Lyon wrote of the capture of the fort later:

After the Lexington battle, I joined Ethan Allen. Eighty-five of us took from one hundred and forty British veterans the fort Ticonderoga, which contained the artillery and warlike stores which drove the British from Boston and aided in taking Burgoyne and Cornwallis. That fort contained when we took it more cannon, mortar-pieces and other military stores than could be found in all the revolted Colonies. At the rate captors have been paid in the late (1812) war, out plunder, which we gave to the nation without even pay for our time, was worth more than a million of dollars. I persuaded many of the Royal Irish Company taken there to join us, who afterwards distinguished themselves in our cause.

Lyon served in different capacities during the Revolution, getting into a dispute with his commander at one point when he was ordered to have soldiers protect the property of wealthy speculators. This led to his being disciplined and to later claims that he was a disobedient coward.

After the war, Lyon was elected to Congress from Vermont. When he went to serve at the capital in Philadelphia he was met with disgust by some of the wealthy members of the aristocratic faction there. He was told that some in Congress thought that his “blood” was that of an Irish commoner, not fit to serve at the nation’s Congress. Lyon responded in his first speech on the floor of the House of Representatives that:

“He had no pretensions to high blood, though he thought he had as good blood as any of them, as he was born of a fine, hale, healthy woman. Before yesterday he never heard of gentle men boasting of their blood in that House He could not say, it was true, that he was descended from the bastards of Oliver Cromwell, or his courtiers, or from the Puritans who punished their horses for breaking the Sabbath, or from those who persecuted the Quakers, or hanged the witches. He could, how ever, say that this was his country, because he had no other; and he owned a share of it, which he had bought by means of honest industry; he had fought for his country. In every day of trouble he had repaired to her standard, and had conquered under it. Conquest had led his country to independence, and being independent, he called no man’s blood in question.” (Annals of Congress, Vth Cong., 1797, Vol. I, pp. 234-5)

Lyon, whose Irish accent and status as a former unfree servant had been mocked, said that he claimed his position in Congress not from wealth or high-birth, but from personal accomplishment and the approval he had received from the ordinary people of Vermont who had elected him. When a member of the aristocratic faction shouted out that Lyon should be locked up, members of the House replied that the heckler should shut up. When a member of the same faction, Roger Griswold, went up to Lyon and insulted him, the immigrant spat in his face.

The now wet Congressman Roger Griswold decided to have his revenge through a physical asaault. He bought a club and two weeks later he snuck up on Lyon and beat him mercilessly. Lyon recovered sufficiently to defend himself using fireplace tongs and the two traded blow until the other Representatives broke up the fight.

An attack on the floor of Congress was not the worst threat to Lyon. The Irish Congressman and several other Irish and Scottish immigrants had become leading proponents of greater social and political equality in the United States. They opposed the adminsitration of President John Adams whom they believed was trying to create a nation ruled by wealthy aristocrats.

John Adams denounced the immigrant Democrats. He asked “Is there no pride in American bosoms?” He was horrified that these radical immigrants “should be the most influential men in the country, all foreigners, and all degraded characters. . . Foreigners must be received with caution, or they will destroy all confidence in government.”

In 1798, Lyon accused President John Adams of pursuing “a continual grasp for power, in an unbounded thirst for ridiculous pomp, foolish adulation, and selfish avarice” in a letter he wrote to a Vermont newspaper. For his criticism of the president he was arrested and became the first person tried under the anti-immigrant Alien and Sedition Acts. These laws were directed at the radical egalitarianism of many recent immigrants. They made criicism of the president a crime that could be punished by imprisonment or deportation.

Lyon served four months in jail and paid a substantial fine. When he was released from prison, the immigrant Congressman was welcomed as a hero and he returned to Congress as a martyr to free speech.

MATTHEW LYON The Hampden of Congress a biography by J. Fairfax Mclaughlin (1900)

The Life of Representative Matthew Lyon