Whether riding on the top of “La Bestia”—the fearsome train that carries impoverished migrants through Mexico toward the United States—or experiencing the kindness of farmers in the Mexican state of Veracruz, journalist Sonia Nazario chronicles the perilous trip from Central America to the US in her Pulitzer Prize-winning book “Enrique’s Journey,” which she will discuss during a visit to SUNY Old Westbury next week.

In the book, Nazario follows the journey of 17-year-old Enrique as he travels from Honduras to North Carolina to reunite with his mother, who left for the states more than a decade before in the hopes of raising her family out of a cycle of poverty. Enrique faces the threat of gangs and corrupt police, as well as the unforgiving wheels of the train, which sunder limbs and take lives in seconds. With no resources, he struggles to procure basic necessities like food and clothing.

Still, he presses forward. Like many child migrants, Nazario writes, Enrique is driven by a deep maternal connection:

“I see so many children with mothers,” Enrique tells his sister. “I want that.”

Nazario will visit SUNY Old Westbury as part of the First-Year Experience Program, and will speak at two events on September 27. The first will be a daytime luncheon and open discussion, presented by the college’s Hispanic/Latino Cultural Center (Lunch will be from noon-1:15pm at the Atrium; and the presentation and discussion will be from 1:20-2:40pm in the Campus Center’s Recital Hall). The second presentation, sponsored by the First-Year Program and geared toward students, will take place from 6:30-8pm in the Student Union. Both are free and open to the public. 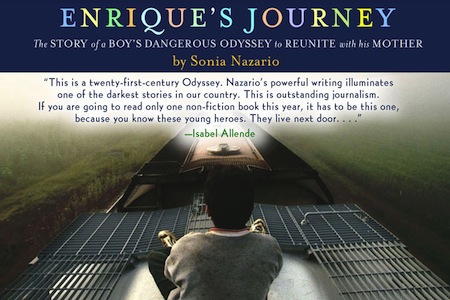 In the course of the week, Long Island Wins will have a series of posts related to “Enrique’s Journey,” including personal stories about familial separation from SUNY Old Westbury students.

In the preface to her book, Nazario writes of her motivations for traveling through Mexico and documenting the migrant experience:

Perhaps by looking at one immigrant—his strengths, his courage, his flaws—his humanity might help illuminate what too often has been a black-and-white discussion. Perhaps, I start thinking, I could take readers on top of these trains and show them what this modern-day immigrant journey is like, especially for children. “This,” a Los Angeles woman who helps immigrants told me, “is the adventure story of the twenty-first century.