Members have different reasons for joining the Ancient Order of Hibernians Hall in Babylon.

Some, admittedly, just want the free parking (it’s located next to the Long Island Railroad station). A portion of the older members use the hall as a social and drinking club, which may or may not adhere to the organization’s mission “to foster the ideas and perpetuate the history and traditions of the Irish people” and “to promote Irish culture.”

But many members, like Nicholas Gordon, a twenty-something from Deer Park, join the Hibernians to get in touch with their Irish ancestry. Gordon, whose parents and grandparents are long-standing members, came to the hall for free beginner Gaelic lessons on a recent Thursday night, searching for that meaningful connection.

“I’m just so interested in my Irish heritage, and the struggle of my ancestors, both in Ireland and here in the US,” he says.

Gordon isn’t alone. Founded in 1946, the Ancient Order of Hibernians Division #2 is the seventh largest branch or the order in the county, and for decades it has served as a locus of community for Irish Americans in southwestern Suffolk County. 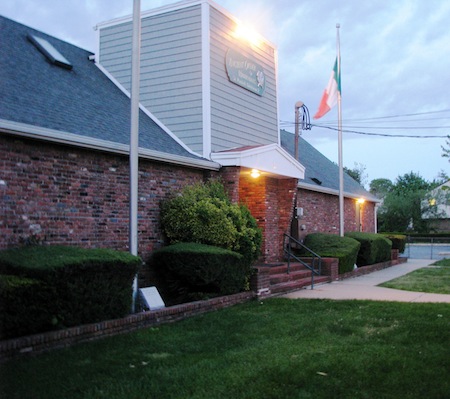 The Irish flags flies high above the Ancient Order of the Hibernians Division #2 Hall in Babylon.

A fifth of Suffolk County residents claim Irish heritage, according to census data, but the thorough assimilation of Irish Americans into the larger mainstream culture begs questions about the role of the Hibernians today.

Originally founded in 1836 as a fraternal, religious organization to counteract anti-Catholic bias and unjust conditions for recent immigrations, these days, the hall in Babylon primarily exists to educate a younger generation about their heritage and give older Irish Americans a place to gather and socialize.

One major part of that educational mission revolves around learning Gaelic (or “Irish,” as speakers of the language refer to it).

The hall offers free, volunteer-staffed Gaelic classes through the Gerry Tobin Irish Language School on Tuesday nights, and the classes attract a core group that teacher Peggy Murano calls “the fanatics who are obsessed with all things Irish.”

She sees the interest in Gaelic as spurred on by younger people. “The older generations resented being forced to learn Irish in [Irish] schools,” she explains. 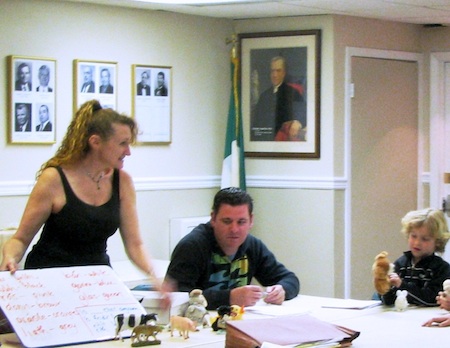 Peggy Murano teaches her class the names of animals in Irish as Turlough Pollard and his son, Breandán, look on.

Pat Clifford, the County Wexford-born instructor who teaches an intermediate adult class, agrees. “Fifty, a hundred years ago, speaking Irish was looked down on, and Irish speakers were considered illiterate.”

The young families attending Murano’s class are evidence of an increasing reversal of that longstanding cultural bias, which started in Ireland and is now being echoed here in Irish American communities. Colleges like Fordham in the Bronx offer Irish language instruction and learning Irish now has a certain cache and trendiness, says Murano.

Students come to the classes at the Hibernian Hall for varying reasons, but all share a commonality of interest in their own Irish ancestry.

Turlough Pollard, originally from Ireland and now living in West Islip, brings his son Breandán to the class to “keep our culture alive. That’s the point of this organization.”

In addition to Gaelic, Irish music and dance are another mainstay of the hall, and during a recent practice session of The Saffron United Pipe Band, appreciation for traditional Irish music spanned generations.

The band practices year-round and competes in international piping competitions. And, of course, they march in the New York City St. Patrick’s Day Parade. 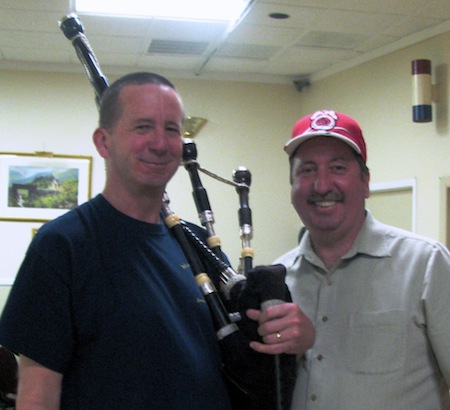 Whether it’s through language, music, or the also popular Irish step dancing program, young people and children are deeply involved with the cultural activities at the hall, guaranteeing the preservation of Irish American culture for at least another generation.

“You become homogenized into the larger culture,” Murano reflects. “The only things left keeping a culture alive are language and music.”

Photos by Jacqueline Sweet except for feature image, which is courtesy of Giumo via Flickr.