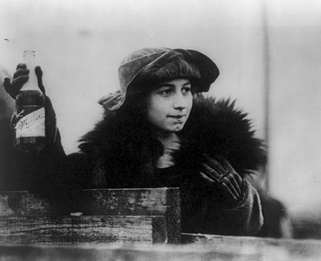 When I was a boy, my mother once told me proudly that we were “wets.” Feeling dry myself, I asked her what she meant. She said that wets were people who opposed Prohibition. Since my mother never had a single alcoholic beverage during my lifetime, I wondered why that was so important to her. “Because,” she told me, “prohibition wasn’t about booze, it was about how white Anglo-Saxons felt about immigrants, Jews, and Catholics.”

Ken Burns agrees with my mom in his new three-part documentary Prohibition, which premiered last night on PBS. If you missed the first episode, it is available free on the documentary’s website.

Prohibition was the first great crusade of newly enfranchised women voters. Americans, men and women alike, had drunk heavily and often since the first English settlers had arrived in America. Alcoholic hard cider with breakfast, beer with a free sandwich for a saloon lunch, and wine or gin with dinner “to aid in digestion.” In 1900, the average American consumed three times as much alcohol as we do today.

American democracy was fostered by alcohol with politicians treating voters to such a quantity of election-day beer that polling places looked like keg parties. The average American male was so dependant on liquor that he drank the equivalent of a bottle of whiskey every three days.

In the late 1800s, Americans began to recognize the real problems associated with chronic alcoholism as well as the hellish costs of the intense binge drinking common at the time. Some decided that an absolute ban on the sale of alcoholic drinks was the only solution.

Ken Burns’ documentary does a decent job of demonstrating how the reformist crusade demonized immigrants, empowered evangelical nativist women, and created modern organized crime as street gangs took over the import and distribution of America’s potent potables. And of course, many of the reformers themselves turned out to be secret imbibers and their daughters the licentious lovers of the men who ran the speakeasies.

The intention may have been to “purify” the American character, but the effect was a never-before-seen lawlessness, mixed liberally with a jigger of hypocrisy and a dash of twisted sexuality.