This story was produced through the Herstory Writers Workshop.

“You have to get married. It’s the only solution.”

Upon hearing these four words, I felt a whirl of thoughts take over my mind.

Like an old black-and-white movie, all those nights from my adolescence when I dreamed of that man who would be my mate for life returned from my past.

I saw myself lying on my bed, listening to love songs next to my only companion, Dino, my stuffed dinosaur. I recalled how the music would transport me to a marvelous world next to that enigmatic man who I was sure, some day, would come into my life.

I was getting lost in that trip to the past when Manuela’s voice brought me abruptly back to reality.

“Karla, it’s just a business deal. You don’t have to get involved with him.”

Her sweet, maternal voice now had a tone of sadness and seriousness that made me think that she wasn’t convinced about the advice she was giving me.

Still absorbing her words, I fell once again into a pit of anguish. The questions in my head began to flow like a dangerous current that was dragging me towards an abyss.

Get married to a stranger, just to get my legal status straight? Perhaps everyone who comes to this country does this? And how will I tell my parents? And what will my friends think when they hear? I don’t understand…I have to do something illegal in order to get legal?  It sounds absurd and dangerous. Besides, I don’t know if I can do it. Isn’t there another way to solve my problem?. . . .

I was becoming lost in my thoughts when I felt her place her hand gently on my shoulder, inviting me to sit down.

Seated in that little ivory-colored kitchen, I realized that with her five-foot high stature and her plump figure, this woman radiated a mixture of respect and tenderness that made me feel protected and somehow at home.

“Mamita, I know that it might be hard for you to understand this whole mess, but this is the reality. I know that right now everything seems illogical and absurd to you, but believe me, in time you’ll realize that what I’m advising you to do is the best thing.”

At that moment the urge to cry was choking me and not allowing me to utter a single word.

“And isn’t there another, less ‘personal’ way to fix my legal situation?” I finally answered.

Upon hearing my question, her lips formed into a smile and her small brown eyes looked at me with compassion.

“I want you to know that I only want the best for you. And never—listen to me carefully—never would I advise you to do something like this if I knew there was a better way to deal with your situation. Besides, we’ve already talked about how an amnesty to legalize the hundreds of thousands of undocumented immigrants will be nearly impossible. And how hard it is to get a student or work visa.”

I continued to analyze my possible alternatives, when I heard her say, “And if you fall in love with an American? Then you wouldn’t be lying to anyone, and you kill two birds with one stone. You find the man of your dreams and you get your papers. That could be a good solution, don’t you think?”

Surprised by her proposal, I could only manage to say reluctantly, “No.” I hadn’t come to the United States to find a husband, and much less to get into trouble. My only desire was to study and better myself so I could go back to Peru very soon. I was only 21 years old, and I wanted to live life to the fullest. I didn’t want to tie myself down to a man, either as a lie or for real.

I always knew that upon arriving in the United States I would have to make sacrifices, but a sacrifice like that one I never imagined, not even in my worst nightmare.

Alex and Manuela not only made me breakfast but they also took me to the travel agency where I was going to get a job. On the way there, through the car window, for the first time I could observe at length life on the streets of Paterson, New Jersey.

Old houses, many of them discolored and shabby, paraded in front of my eyes, creating the illusion of being in an abandoned city.

The enormous brick buildings took up a large part of the blue sky. Concrete monsters that seemed to be everywhere made the little wooden houses seem insignificant. Their balconies were full of clothes hanging on thin clotheslines. Cardboard boxes and Christmas lights (although it was June) seemed to be the most common decorations for the inhabitants of this area.

I saw many children, most of them black, playing alone in the street. They seemed to be unafraid of the cars that passed quickly by, right next to them.

With their large T-shirts, their jeans hanging below their hips, and rags tied around their heads, these kids seemed to walk aimlessly about. Their eyes told me that they had to be strong and self-sufficient to survive in this jungle of asphalt and concrete.

Only a few meters away, another spectacle was just beginning. A homeless person dressed all in black and wearing a turban around his head, was playing a trumpet without a care in the world. The bell of the trumpet had inside it a black stocking rolled up into a ball. No sound came out of the trumpet, but he seemed to be enjoying the silent concert.

If someone had told me that these images were coming from an American city, I wouldn’t have believed it. In my limited knowledge of what the United States was like, it never occurred to me that I would see so much poverty. My first impression of this country had been very different. I had come on vacation to Florida, Georgia, and New York, which had struck me as impressive places. Beautiful scenery, elegant houses, amusement parks, big buildings, dreamlike sunsets. Everything that a travel agency wants you to see—completely different from the reality that I encountered this second time around, when I began to live in this country. 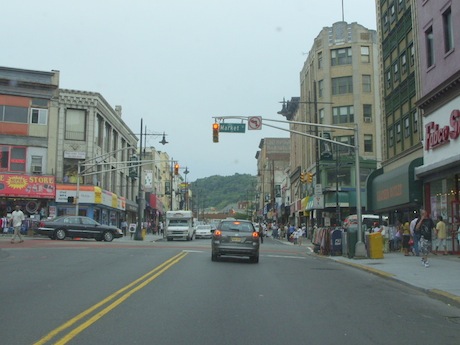 We quickly arrived in downtown Paterson. Jam-packed with cars and pedestrians, the streets seemed to have a life of their own. We parked in front of a small bakery that was called “Los Intocables (The Untouchables).”

“Did I read that right? How strange,” I told myself. “The name is in Spanish.”

Without giving it another thought, I began to walk. What a surprise it was to see that only a few businesses had names in English.

Wow!! The names of these businesses weren’t only in Spanish, but they referred to the culture of Peru. I couldn’t believe it. A small part of Peru was alive and well in this American town.

The first few days of work, I felt nervous and apprehensive about having to walk alone on those streets. Rundown auto repair shops, 99-cent stores, small delis, even a McDonald’s—these were some of the businesses that crossed my peripheral vision as quickly as my steps. My ears, on the other hand, perceived the coming and going of strange sounds: whistles, barking dogs, flirtatious compliments in a mixture of English and Spanish, shouts, horns and deafeningly loud music. 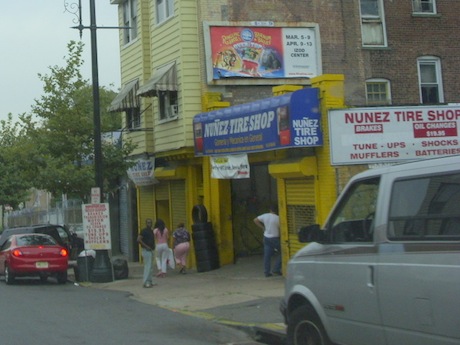 The extravagant characters that walked near me on those streets were merely ephemeral distractions for my eyes. All of my attention and my five senses were focused only on walking. From one moment to the next and without advance warning, my high heels declared themselves to be my worst enemy, and blisters came to form part of my monotonous routine.

Crossing the long Paterson Bridge, all the muscles in my face, which felt petrified, relaxed a little. All of this seemed ironic, since streets very similar to these were not completely unfamiliar to me. On the contrary, I had already confronted very similar situations in my native city of Lima. In recent years, there had been a tremendous increase in crime, which had made all of us easy targets. The few times I had to walk alone through that enormous city of Lima I always did it cautiously, just as I was doing now in this replica of a third-world city known as Paterson.

I think that what I was afraid of were these new sounds in English and these faces that were either as white as snow or as black as ebony.

In the second half of my daily odyssey, as I would walk back home, the noisy and chaotic downtown would have a relaxing effect on me. I felt a connection upon seeing my image reflected in the eyes of these other people who, just like me, day after day, engaged in the ritual of survival.

Karla Faloon is an interior designer at Hildreth’s Home Goods in Southampton and a columnist for Voz Latina newspaper. She lives in Riverhead and is originally from Lima, Peru.

To order a copy of “Latinas Write/Escriben,” a bilingual anthology with original memoirs from Latina voices on Long Island, email contactus@herstorywriters.org.