Arun Padmanabhan left the Indian state of Tamil Nadu two years ago. He now lives in Hicksville, directly behind House of Dosas, a vegetarian South Indian restaurant that is popular among Indian expats for its traditional food and atmosphere.

“In our country, you’d get a similar ambiance,” Padmanabhan says, gesturing at the metal drinking cups and tin serving dishes. “It’s a small thing, but it makes a difference.”

Since 1997, Indian immigrants across Long Island have relied on House of Dosas for the taste and feel of home. The restaurant specializes in the dosa, less common than ubiquitous dishes like chicken tikka and vindaloo. The large, thin crepe is made from a fermented rice and lentil batter, usually filled with masala-spiced potatoes and accompanied by a variety of dippings. The food has a mythic place in the hearts of South Indian immigrants.

“You miss it; you want it,” says restaurant owner Jay Thiyagarajah of the food. “For Indians who live in America, it’s very hard to make dosas at home.” That’s due to the process of making the batter, as well as tools that aren’t readily available in the US, such as proper pans and manual grinders.

With the help of that cultural nostalgia, Thiyagarajah, who is ethnically South Indian and emigrated from Sri Lanka in 1985, has created a restaurant that is an integral part of the Indian immigrant community on Long Island. When he established the eatery, there were only four or five other Indian restaurants in the area, he estimates. Today, Thiyagarajah says there are about 24 Indian restaurants within 15 blocks of his spot.

“A lot more Indians have come here now,” he says. “From Nassau and Suffolk, they come here to do their shopping because of the big groceries like Patel Brothers,” a supermarket located across the street from the restaurant.

Customers have worked House of Dosas into their weekly errands. “If you go to Patel to do your weekly grocery shopping, you can stop here for a snack before you go home,” Padmanabhan says. 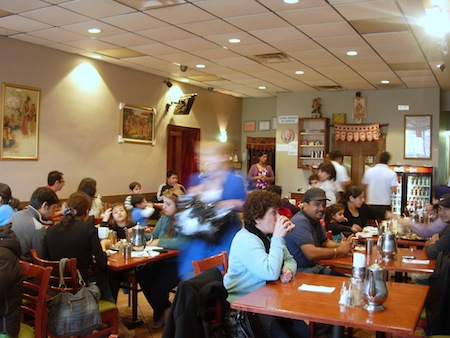 Even if the restaurant’s location weren’t so convenient, Padmanabhan, a vegetarian, says he’d still come for its authentic flavor. On a Thursday evening, he and Krishna Santosh, originally from the Indian state ofAndhra Pradesh, enjoyed the vegetable cutlet and chili pakora, spicy green chilies dipped in chickpea flour batter and deep fried. “It’s something you’d not get at any other Indian restaurant [on Long Island],” Padmanabhan says of the chilies.

Parthasarathy Janakiraman dined at the restaurant on a busy Saturday afternoon. He is from Chennai in South India and has been visiting House of Dosas for four years. The authenticity of the food is very close to that of restaurants in his home country.

“We travel a lot to get here, but it’s actually worth it,” says Janakiraman, who lives just outside Hicksville. He notes the thali lunch special, which he says he can’t find at other Indian restaurants in the area. The traditional South Indian lunch includes rice, roti (wheat flatbread), sambar (vegetable stew), dal (lentil soup) and yogurt.

Other customers are drawn by the strictly vegetarian menu, as many Hindi South Indians do not eat meat for religious reasons.

“Not even eggs do we use,” Thiyagarajah says with pride.

That has broadened the clientele to non-meat-eaters of all ethnicities. Vegetarian Vincent Glasser began frequenting House of Dosas in the mid-1990s. He comes about once a week: “It’s delicious. It’s different. And it gives you a good feeling in your stomach; a wholesome feeling.” 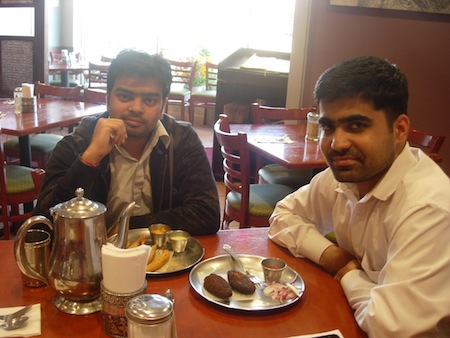 Dr. Ashok Vaswani is an endocrinologist and nutrition expert, and sticks to a healthy diet himself. He prefers the dahi vada (lentil balls in spicy yogurt) and idly (steamed rice and lentil patties). He confirms the restaurant’s popularity, which is especially noteworthy on weekends. “You won’t find parking here,” he says.

While nearly all of the restaurant diners emphasize its authenticity, Thiyagarajah has taken some license with the menu. Originally, there were only a couple of basic dosa varieties. But some of his most popular offerings today include the Pondicherry, which adds spice to the crepe, and the Malgudi Rava Masala, a semolina crepe with chutney, ghee (clarified butter), onion, chilies and cheese.

But for immigrants, House of Dosas’ familiarity is vital for staying connected to the culture. Sushil Chachra of Westbury grew up in Mumbai and has frequented the restaurant since befriending Thiyagarajah nearly 20 years ago.

“South Indian [food] is my favorite food, and it’s authentic, and that’s why I come all the time,” Chachra says. “I’m used to it since childhood.”