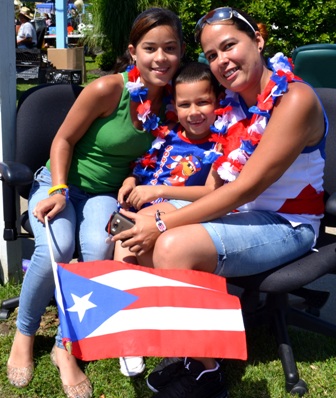 Thousands of proud Latinos filled Fifth Avenue in Brentwood on Sunday to watch the annual Puerto Rican/Hispanic Day Parade, one that might not have happened this year if not for some heroic fundraising from local supporters.

Due to budget cuts and funding issues, the parade was cancelled as of two months ago by Adelante of Suffolk County, a community-based, multi-service organization, but Brentwood community members worked to save it.

In particular Margarita Espada, founder and director of Teatro Yerbabruja, and Assemblymember Phil Ramos united to work with the community and raise the money needed to keep it alive.

In the process of finding sponsorships and community-oriented donations, they also added some new vibrancy to the celebration.

“For me it’s not only a parade, it’s the importance of keeping the history alive,” said Espada.
At the parade, salsa music played on many of the moving stages, bringing families and friends together to dance, cheer, and wave Puerto Rican flags as the procession traveled along.

The history of the Puerto Rican/Hispanic Day Parade dates back to the 1940s, when Puerto Rican pioneers moved to Long Island. Two decades later, they decided that they wanted to create a parade that would acknowledge their heritage in Brentwood.

Celebrated for 46 years now, the parade annually attracts around 40,000 people from a spectrum of Latin American countries.

One of those attendees was Ivelissa Medina, who was sporting a shirt that read, “100% Puerto Rican,” and waving a large boricua flag. About the parade, she said, “Me gusta todo.”

Medina had heard about the cancellation of the event before and said she was “surprised that it happened,” but was glad that her family got to spend the day together celebrating their homeland.

“It’s been a pleasure organizing this effort and I’m very proud how people get together,” said Espada. “It’s to show the power that our community is gaining.”

Assemblymember Phil Ramos spoke about the important effort to keep the parade going:

“I felt that losing this parade would be a symbol,” said Ramos. “Since we are a community that has faced a lot of hardships, we show in this situation that we are able to persevere and maintain our traditions.”

Here are some photos I took of the parade: