“It’s not just about eating and drinking,” said Javier rather sternly, referring to the Mexican holiday of Cinco de Mayo, to be celebrated this weekend. “The history is what is important.”

Cinco de Mayo commemorates the 1862 Battle of Puebla, a kind of David and Goliath encounter when the city of Puebla triumphed over the powerful French army, Javier told me. To be sure he got the details right, he looked at his notes, carefully preserved from his high school history class in Mexico.

As hard-working immigrants now living on the East End of Long Island–Javier installs windows and Clara cleans houses–they are proud of the Mexican military victory that gives the holiday its meaning, even as the public at large thinks of the day mostly in terms of tacos and tequila.

Make no mistake, eating well is a part of Mexican celebration, too. Clara’s cousin Rocio, who came to this country with her parents as a teenager and now helps her mother run a small business in Greenport, often organizes a large family gathering. Almost every year, she’ll host 40 or 50 people, when you include the children and the in-laws. 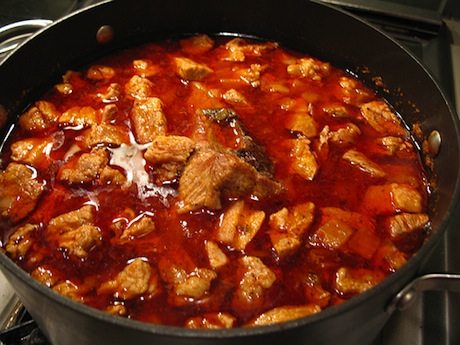 Usually everyone brings a dish because it would be too much to cook for so many people. Culinary highlights in Mexican households tend to be specialties like mole and posole, dishes from the Mexican state of Puebla, where the holiday is celebrated with gusto. When families don’t have time to get together at home—after all, early May is a busy time for the many Mexicans who do seasonal work—they head for Mexican restaurants like Meson Ole, a Long Island chain that serves special meals for the holiday.

While there are no dances or songs that are particular to Cinco de Mayo, it can be an occasion for the famous folkloric dances like jarabe tapatio.

The Cinco de Mayo festivities in Mexico largely take place in the state and city of Puebla. Elsewhere in the country the victory has less cultural significance, but children everywhere study it at school. Cinco de Mayo is a national holiday in Mexico, but it is sometimes misunderstood in the US as Mexico’s Independence Day, which is properly celebrated on the anniversary of September 16, 1810, when Mexico declared independence from Spain.

What is the significance of Cinco de Mayo then? Can it mean anything to Mexicans and Mexican-Americans who live on Long Island now? There are at least 25,000 Mexicans in Nassau and Suffolk Counties, and census records show a huge increase, about 68 percent, between 2000 and 2010, according to Joseph Pereira, a researcher at the Center for Urban Research of the City University of New York. So while Mexicans don’t represent one of the larger immigrant groups on Long Island, there are still thriving communities here.

That said, not many Long Islanders—or Americans, for that matter—know that Mexico was once under the thumb not only of Spain but of France. In 1862, the country had been weakened by wars (including the Mexican-American war that ended in conceding the state of Texas to the United States) and internal political conflicts.

When Benito Juarez became President in 1861 the country was in financial ruin, the result of a four-year civil war that had left Mexico massively in debt to several European countries. With the backing of the Congress of the Republic, he issued a moratorium on payment of foreign debt.

Although both Britain and Spain briefly intervened militarily (and unsuccessfully) to collect their debt, France saw the country’s vulnerability as a fine opportunity for a larger adventure—establishing an empire in the New World. The invasion began in late 1861, with French troops landing at Vera Cruz and advancing north over the next few months. For a time, French grandiosity seemed likely to trump Mexican republicanism, as a French-backed emperor, Maximilian I of Mexico, installed a government seat in Mexico City from 1864-1867. But in 1867, Maximilian was captured and executed and the so-called Second Mexican Empire collapsed. 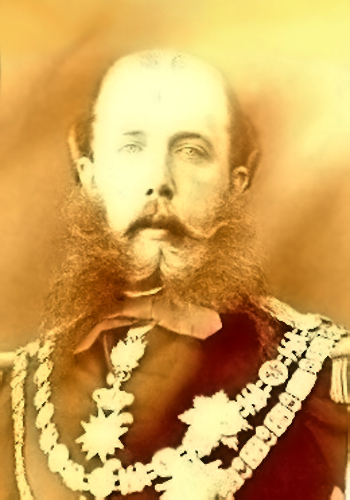 Maximilian I, the sole monarch to rule what the French called the “Second Mexican Empire.” (Credit:: Wikipedia)

The significance of Cinco de Mayo goes back to the beginning of the French occupation. On May 5, 1862, a French general heading toward the conquest of Mexico City made the mistake of attacking the city of Puebla from the fortified north and, as a result, suffered a humiliating defeat. In a single day, he lost almost 500 men, while only 83 Mexicans died, although theirs was a ragged army of republicans only recently recruited for military service.

The victory was short-lived, but it delayed the French as they pressed on to occupy Mexico City and the north. And it remains a symbol of national strength for Mexicans everywhere. Rocio says, “When the country had all this debt and fell into crisis and the French wanted to attack and expand their territory…it’s a source of pride that we could still be more powerful than such a large country.” Javier goes even farther in noting the victory’s significance: “We discovered that maybe the French weren’t so superior—more disciplined, more organized. It was a step in the recognition of Mexico as a free, sovereign country that had its own laws and customs and couldn’t be governed by others.” 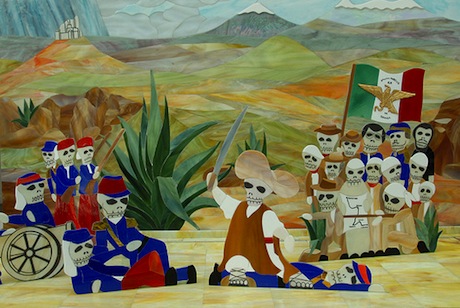 A glass rendition of the Battle of Puebla from the Museo de Arte Popular in Mexico City. (Credit: Ilhuicamina)

In the United States, the spread of Poblanos around the country has turned a local story into an occasion for all Mexicans to celebrate, now often joined by Americans in big cities. Parades and street fairs occur in Los Angeles, Chicago, and St. Louis; churches in New York City sponsor smaller events. American eateries are also discovering the holiday. On the North Fork, Mexican chef Saul Flores at the venerable Old Mill Inn in Mattituck is introducing a Latin influence into the largely seafood menu, including pork carnitas and four kinds of tamales.

But Javier, Clara, and Rocio hope that these diners see that for Mexicans—and Poblanos in particular, who make up most of the 400,000 Mexicans in New York State—the holiday is special because of its history.