I wanted to take just a few moments to write about the picture on The Immigrants’ Civil War logo. When I was designing the logo almost three years ago, I wanted the picture to convey what the series was about.

When I looked at other Civil War websites and blogs, the logos they used drew on just a few types of graphic illustration. Most common was the heroic painting of men in combat or on the march. Some were painted during the war, others were modern by artists like Mort Kunstler. A second type featured a painting or photo of a Civil War commander, like Grant, Sherman, Jackson, or Lee, or a civilian leader, most commonly Lincoln. The third type was a modern color photo of a Civil War battlefield focusing on either a monument or a set of artillery.

Here are some examples:

I thought these would all be wrong for this series. While I cover many major battles, nearly 70% of the articles are on what happened off the field. I wanted a logo that conveyed the sense that immigrant soldiers saw themselves as representing their families and their communities. So I settled on a photo that was different from the images used in just about every other Civil War blog or website. One in which the most prominent figures include a woman, two children, and a baby.

What a magnificent woman she is. Defying Victorian conventions of delicacy, she is in camp with the man she loves, exposed to the same rough life he lives during her time there. Look at her arms. Like most women of the day she worked from dawn until she fell asleep. Her bulging biceps didn’t come from the gym. She has brought him food, sustenance connecting him to his home. She is showing her affection for him, and, by bringing their children, she is reminding him that his service involves the whole family. If he is killed or wounded, the lives of three very young people will be changed forever, and their hurt will be carried well into the 20th Century.

Now look at the children. The son is in a little boy’s version of a Union uniform. He identifies fully with his father’s service. He is still a boy though, as you can see by how tightly he clutches the dog in his arms. His sister, like most girls of the era, has been pressed into service as the “little mother”, acting as a caretaker for the family’s baby.

I also like the fact that while this is a posed family group portrait, there are seven other members of the regiment scattered in the background. While they seem to be randomly placed, they are all facing the camera, and their facial expressions unambiguously tell us that they know they are being photographed. They are this father’s military family, one that may take him away from his home front family for years or even forever.

The photo was taken at the camp of the 31st Pennsylvania Regiment 2nd Pennsylvania Reserve. The regiment was primarily recruited in Philadelphia in the first two months of the war. The 31st was not an “immigrant regiment”, but it included men like Private John R. Query of Company E.  Query had emigrated from County Antrim in Ireland in 1850 when he was a little boy. From a Protestant Irish family, he enlisted as a teenager in a company called the “Scotch Rifles.” As a “Scots Irish” he may have felt comfortable in the culture of the company. Query did not survive the war, dying of wounds suffered at Gettysburg.

Company C of the 31st had the distinctly Irish name of the Hibernia Fire Engine Target Company. Men with names like Casey and O’Brien fought in it. A company from Lancaster in “the Dutch Country” included many men with German surnames.

There is a second picture of the same family in a more relaxed pose.

As this detail from this picture shows, the children are no longer in the middle of a military camp. They are at home.

The photo was taken at Fort Slocum, part of the Washington defenses. It is credited as an 1862 photo taken by Matthew Brady’s studio. 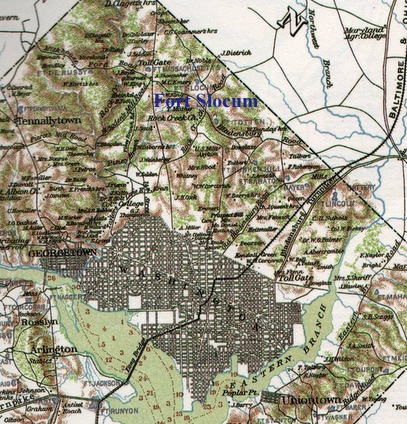