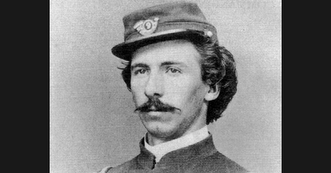 Patrick Guiney was 26 when the Confederates attacked Fort Sumter in April of 1861. Although he came from modest circumstances, the Irish-born young man had studied law and been admitted to the Massachusetts Bar. He was among the first wave of volunteers to enlist to defend the Union against the breakup of the United States and he quickly rose to become an officer, and later the colonel commanding the Irish 9th Massachusetts Volunteer Infantry Regiment.1

To his men, Guiney was an intelligent and courageous leader and a strict disciplinarian. He was willing to die to preserve the Union, and he came to advocate the abolition of slavery as well.

However, away from his men, Guiney had his doubts about how the war was progressing. In 1863 he wrote that “I hope for success. I fear defeat,” and he knew who would be responsible for defeat; “If the nation dies, the monument…to commemorate its fall should be inscribed ‘The Republic…expired for want of a General to lead its armies.’” The possible defeat of the army was a source of anguish for him. He wrote after the Union loss at Fredericksburg “even now the ‘Star Spangled Banner’ sounds like a wail to me.”2

The incompetence of Union generals did not just jeopardize the future of the country, it also prolonged the war and kept Guiney away from his beloved wife Jennie. He wrote to her that “what my heart has wished is to love and be loved” by her. He wrote “I had been thinking for a long time of seeing you—you only. In all the wretched moments…I thought of the time when I could see you… You Jennie were all I could ask for or my heart ever craved…”3

Jennie’s visits to Guiney in camp did not slake his need for her. When she inevitably went back to Boston after a visit, he wrote her; “I miss you so much that I must commune with you tonight again… I am so lonesome at night…my heart still hovers around you-My Darling.” He understood that his wife was experiencing the same sense of separation, writing that “I do not wonder, Love, that you are lonely. I am so, and it cannot be otherwise for either of us…This separate existence is becoming unreasonable and unbearable…I must confess that I need you near me…” While the stereotype of the Irish immigrant soldier is of a tough, battle-hardened man, Guiney confessed to his wife; “My Darling, if you knew how my heart is bound up in you-how tenderly I cherish you in my inmost soul…how wholly I rely on you for my happiness.”4

At the start of 1864, Abraham Lincoln took a step towards resolving the problem of poor generalship that Guiney had bemoaned the year before. The president made Ulysses S. Grant, the most successful general in the Union service, the commander of all the armies. With the great campaign of the war about to begin, Colonel Guiney was reminding his wife that he would one day be able to leave the army and return to her. On April 7, 1864 he wrote Jennie to remind her that in a year his term of service would be up and he would be coming home, but he added “a campaign is coming on and who can tell its results.” Guiney would soon be in the Virginia Wilderness where his dreams of coming home would become an awful reality.5

Video: The Battle of the Wilderness