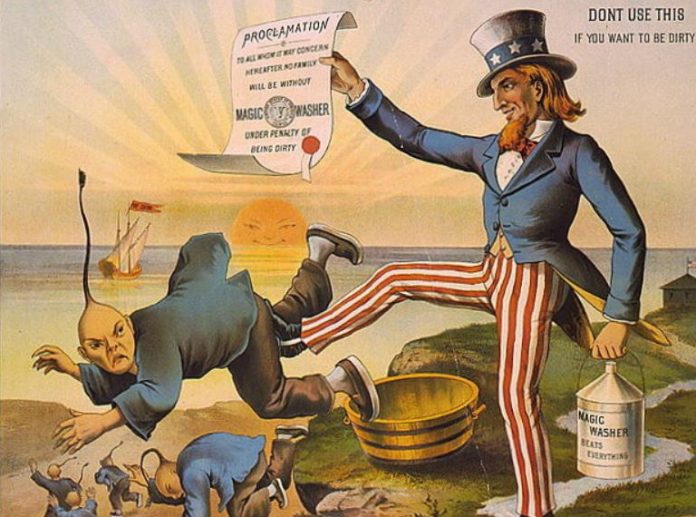 The half-decade after the Civil War was a time of intense debate of the question of who exactly was an American and how one became American. Roughly a quarter of white native-born American men had risen up against the United States government and tried, through acts of extreme violence, to detach a third of American’s landmass into the Confederate States of America. Did those who participated in armed rebellion forfeit their citizenship as a result? Did African Americans, who had been declared non-citizens by the Supreme Court in the 1857 Dred Scott Decision win their citizenship by defending the American flag with their lives?1

And what of the citizenship of immigrants? Tens of thousands of immigrants had rioted against the draft in 1863 and half-a-million had served in the Union Army. What did the United States owe to the loyal immigrant and how did it protect itself against the rebellious? In the next two articles I will look at the change in the way that immigrants become citizens that took place in 1870.2

The process of becoming a citizen is called “Naturalization.” It is the way an “alien” assumes the same status of United States citizen as the natural-born American. Congress’s decisions in drafting the Naturalization Act of 1870 would have profound consequences for the development of American democracy for the next seven decades.3

In the 21st Century many Americans simply take for granted the idea that the Federal government has the power to regulate immigration. The Constitution as drafted by the Framers, however, was completely silent on the subject of immigration. Nothing in the Constitution authorized the government to restrict immigration or deport immigrants. Visas, border patrols, and immigration courts are not even hinted at anywhere in the founding document. The Constitution does, however, speak briefly of naturalization. Article I, Section 8, Clause 4 allows Congress to establish a uniform rule for naturalization.4

When the first Congress wrote a “uniform rule for naturalization” in 1790 it created a threshold for becoming a citzen vastly easier to cross for most immigrants than the modern naturalization process and impossible to ever meet for many others.5

Under the modern naturalization process, most applicants have to have lived as permanent residents in the United States for five years or more. Under the 1790 law they only had to live here for two years. Today immigrants have to pass tests of English-language competency and knowledge of civics. The founders of the country never required immigrants to know English before becoming citizens and there was not test of civics. At the time, large numbers of immigrants spoke German and French.6

The biggest difference between naturalization in 1790 and naturalization in 2018 is who was responsible for approving naturalizations. Today, a permanent resident applying for naturalization files a detailed twenty page form with the U.S. Citizenship and Immigration Service (USCIS) of the Department of Homeland Security. The immigrant pays a fee of $645 to pay for background checks and processing. The applicant is fingerprinted and subjected to biometric vetting against law enforcement and CIA databases. Typically, after six months or more the immigrant is interviewed in person by an officer of the Department of Homeland Security and then either recommended for naturalization or rejected.7

Under the 1790 Act, there was no real process for naturalization. The immigrant merely went before any judge of virtually any court after living here for two years. The court did not even have to be a Federal court. Any state court judge could naturalize immigrants. If the immigrant satisfied the court that he lived in the U.S. for two years and was of good moral character, he would be sworn in. No tests, no background checks, no English-language requirements. Immigrants quickly learned which judges performed naturalizations without asking any questions. Since judges were usually elected, political parties encouraged their judicial candidates to naturalize without restrictions to help secure the immigrant vote. A state court judge who denied immigrants’ requests to naturalize might soon be voted out of office.8

The one way the 1790 Naturalization Act was tougher was in restricting naturalization to only someone who was a “free white person.”  With tens of thousands of Chinese immigrants arriving in California after the discovery of gold there in 1848, for the first time in American history a large number of non-white immigrants were cut off from the blessings of democracy. By 1870 there were 63,000 Chinese living in the United States.9

The naturalization laws would change little over the next seventy years, apart from increasing the waiting period for immigrants to apply for citizenship from two to five years. Then, in 1870, Congress took up the rewriting of the naturalization law.10

Many of the same Congressmen and Senators who had voted for color-blind birthright citizenship would now consider whether naturalization should be color-blind as well.12


Warning: A non-numeric value encountered in /home/customer/www/longislandwins.com/public_html/wp-content/themes/Newspaper/includes/wp_booster/td_block.php on line 326