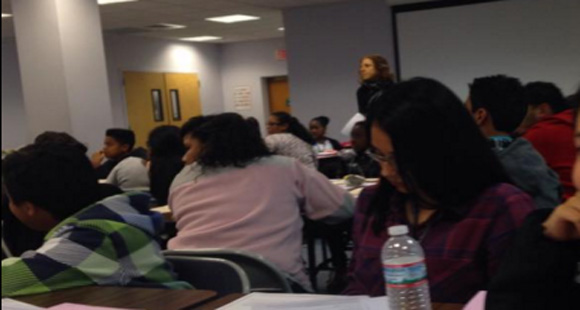 On Tuesday I had the pleasure of listening to students from Brentwood and Uniondale talk about immigration at a gathering at BOCES in Garden City. I didn’t do the speaking, just the listening.

A group of six eight and ninth graders were at the table with me to engage in a civil discourse about an immigration issue. The one they discussed was border security.

The interchange was very lively. The students wanted to have a system in place that safeguarded the border from criminals and terrorists, but also one that was primarily designed to welcome immigrants to the United States. One young woman said that she worried that with all the talk from politicians, Americans are starting to view immigrants as people who come here to hurt us, when they are really here for a better life.

All six of the students found the proposal to build a wall along the Mexican border unreasonable. They said that the cost would divert money from building schools and helping the homeless. They also were not sure that it would be at all effective in keeping immigrants out. They rejected the idea that the wall be paid for by taking money from undocumented immigrants sending funds home to help their families. “They are poor people, how can you take their money that was meant to feed their families?” asked one girl.

Several of the students said that part of the problem is that it is so hard for immigrants to come to the United States legally. They recommended that easier legal ways for new immigrants to come and work would allow us to do better screening.

Overall, the students were well-informed. They live in villages with moderate to high rates of immigration and they knew immigrants in their own communities. They wanted a border security program that was humane and not punitive.

The program was organized in conjunction with the American Immigration Council and it involved nearly a hundred students.