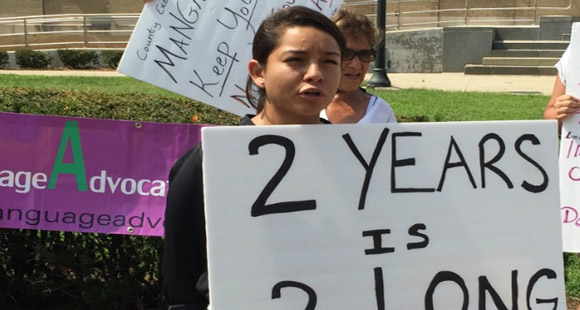 When Laura Lemus wakes up in the morning, she is eager to go to work.

Loving her job as Special Projects Coordinator at Long Island Wins is not the only reason. Even more important, she says, is being part of a larger movement, one that is “inspiring, motivating, and frustrating at times” as it advances the rights and interests of people like herself, immigrants struggling for the opportunity to become Americans. And the icing on the cake is that she is now working legally.

Laura is a DREAMer, a 24-year-old college graduate whose DACA permit has just been renewed.

From the beginning, she has been one of the lucky ones. Arriving on the East End of Long Island from Michoacán, Mexico, as a baby, she has benefited from a good education and a stable, supportive family. She is a role model for her three younger siblings (all American citizens) and an occasional translator for her parents. “I knew my parents were investing in me,” she says, “and that made me try to do well in school.” Concerned about safety and the risk of an arrest that would endanger future legalization, her mother drove her everywhere when she was sin papeles, rather than allow her to drive without a license. It was an advantage that few young undocumented adults enjoy.

But her road has not always been smooth, and it still has potholes. Although she grew up in a town where no one targeted her as Hispanic or foreign—“People don’t even know I speak Spanish or have a Spanish background,” she says—being undocumented sharply limited her choices. When it came to choosing a college—she got in everywhere she applied—she had to temper her ambitions with realism. “It came down to what I could afford, not the one with the best program, since I had no access to financial aid.” She did, however, get a private scholarship from SUNY Old Westbury (which has recently been named one of the 25 best public colleges in New York), and its honors college gave her a voucher to pay for books. She supplemented her studies in history and philosophy, working part-time during the school year and full-time during the summer. While she has no regrets about her education so far, she has had to postpone her dream of law school, since her DACA status does not entitle her to public grants or loans.

Laura is grateful for DACA, “knowing that I can breathe for two years.” Without it, she says, “I’d be working in a restaurant and saving, waiting to see where my life was going.” Being hired in her job in 2013 resulted directly from getting her first work permit, and the trip she took to California recently was not a risk she would have taken relying on her Mexican passport. With an ID that says she is a New Yorker she feels more at home. She is confident that that the program will not be canceled by a future administration. “The government is making a good deal of money from us,” she says. “They’re not going to deport all those children.”

But living with what amounts to a temporary pass to American life is not easy. “I’m in limbo,” says Laura. As a practical matter, she still moves in some of the shadows of her former lack of legal status. “I’ve made it my routine not to do things that could get me deported. Even parking tickets, just in case they fingerprint me for renewal.” Deeper issues of identity haunt her. “When someone asks me, I can’t say what I am.” To live under DACA forever would be to accept being permitted but unwanted. And she would never be able to participate politically in ways that mean the most to her. “So many young adults don’t vote because they are uninformed or don’t care,” she says, “and here I am working in a situation where I want to vote and can’t.”

Journalist Maria Hinajosa calls the vacillations of US immigration policy “the US mambo—one step forward and three steps back.” It’s a dance that frustrates Laura as she confronts the setbacks in implementing the federal program that would expand DACA and legalize the status of many undocumented parents of American children. She longs to travel with her family to see the grandfathers in Mexico that she has never known. “I am paying taxes and contributing to my community,” Laura says. “It’s time to be part of the overall experience of being American.”