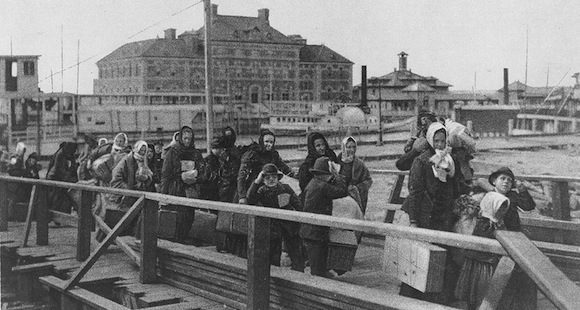 This is the fifth part of our new series by esteemed historian, professor, and activist Michael D’Innocenzo. Inspired by our enormously successful summit on immigration on Feb. 26, of which he was co-director, the articles are based on a series that originally appeared in The Island Now. You can read the whole series here.

If you want to appreciate what our new generations of immigrants will contribute to Long Island and our nation, consider doing a check of your own family “roots.”

This would be a great project that could be launched with the help of Long Island’s exceptional public libraries.

All of us in the United States are descended from immigrants. The only questions are:

2. What awareness do we have of the journeys of our ancestors?

As a youngster, I thought, for a while, that anyone who had a name that ended in a vowel shared my Italian heritage. But I learned that FDR was one of our early multi-ethnics, combining Dutch ancestry with the “de la noes” of French Huguenot background.

That both a Republican and a Democrat Roosevelt (with Dutch/Huguenot backgrounds) rose to the American presidency (in a still-prevalent “Anglo” society) should receive more emphasis than has been accorded.

FDR knew that his female ancestors could claim membership not only in the Daughters of the American Revolution (DAR), but also in The Colonial Dames of America.

At a time when the DAR resisted newcomers, describing their ancestors as “colonists” and all others as “immigrants,” FDR offered a striking response:

“Remember, remember always, ladies that all of us, and you and I, especially, are descended from immigrants – and revolutionists!”

John Kennedy’s father did not like to be called “Irish-American;” he asked what it took to be regarded as “American.”

But when Jack sought the presidency he learned what every ethnic person experiences in our nation: no matter how you define yourself, you need to deal with how others see you.

Jack Kennedy increasingly highlighted the heritage his father sought to transcend. If you have not seen the documentary, “Kennedy in Ireland,” it powerfully demonstrates the enormous pride of people in Ireland for one of “their kind.” On that June 1963 visit, President Kennedy said:

“When my great-grandfather left here to become a cooper in East Boston, he carried nothing with him except a strong religious faith and a strong desire for liberty. If he hadn’t left, I would be working at the Albatross Company across the road.”

As his politics moved beyond Boston, President Kennedy wrote a book, appropriately entitled, “A Nation of Immigrants.” When Robert Kennedy added a new introduction after his brother’s assassination, he emphasized:

“Our attitude toward immigration reflects our faith in the American ideal. We have always believed it possible for men and women who start at the bottom to rise as far as their talent and energy allow.

Neither race nor creed nor place of birth should affect their chances.”

Frank Sinatra, bolstering FDR during World War II, was awarded a special Oscar for his film song from “The House I Live In.”

“The faces that I see
All races and religions
That’s America to me.”

As I mentioned earlier, one effective way to relish our immigration heritage of diversity with its quests for progress and inclusion is to do some family history checking. Perhaps the marvelous array of public libraries in Nassau and Suffolk could assist in such pursuits.

This is not a new idea; but it could be expanded with beneficial results – because those who seek perspectives on their own families are very likely to appreciate the journeys of those who have more recently arrived on Long Island.

Just as many of our libraries participate in “Long Island Reads,” there is a book (or two or three) to be assembled about “The Heritage of Long Islanders: Standing on the Shoulders of Immigrants for Progress.”

During the 1970s, I had a fellowship at Chicago’s Newberry Library, which specializes in family history studies. As a result of that experience, I developed a college course that was one of the most satisfying I have ever taught.

I called it: “Roots and Beyond: Family and Community in American Society.” The “Chronicle of Higher Education” gave a report on the experiences of those Hofstra students.

Young undergraduates began by doing a brief autobiography of part of their life (often junior or senior high school), then did a grandparent study, followed by examining changing developments in the community to which their families migrated.

Among the many fine results cited in the CHE report was the building of connections across age divides as college students got to know their grandparents better by interviewing them, while also getting perspectives from their contemporaries and other family members. Unanimously, young people came away from their studies with high appreciations of what their elders had done, a sense of where they began, the obstacles and challenges they faced, and the efforts that were expended in order to advance.

By seeking to place their family in the context of their community they also became aware of its demographics and the nature of suburban bonding experiences.

Those young people in that first course in the 1970s achieved much of what the American Historical Association recently said is still lacking in our history classes (and in our society): 1) an ability to foster informed, critical thinking, and 2) to nurture empathetic citizenship.

Every individual and every family can be enriched by doing their own “Roots and Beyond” study. From that is bound to come a deeper appreciation of what fellow citizens have experienced and are newly experiencing as today’s immigrants.

Family and community studies can surely help to enhance lives for old and new Long Island residents. The books that portray the advances from immigration by scores of Long Islanders are waiting to be assembled. All an editor needs to do is assemble the people’s stories in Nassau and Suffolk.