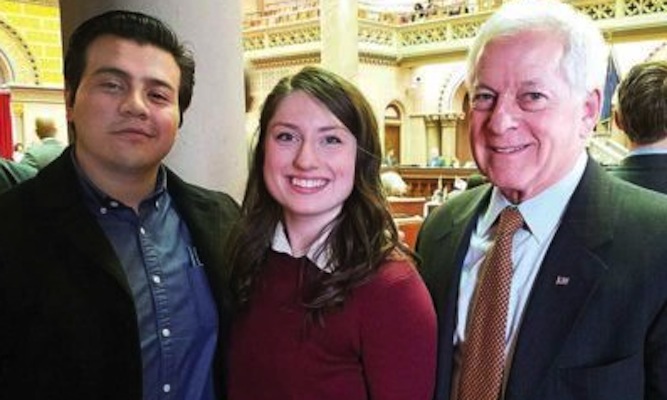 When Nelson Melgar turned 13, his family made the difficult decision to leave their home and fledgling coffee business in Honduras to come to the United States. Like many Central American immigrants, they were very poor and their country offered no opportunities for a better, safer life. Nelson and his family arrived in Glen Cove in 2003 and have made it their home for the past 14 years.

During his young life in Honduras, Melgar had no choice but to work hard at the family coffee business, leaving little time for school. When he enrolled in middle school in Glen Cove, his guidance counselor told him he was very behind and would have a difficult time catching up.

“That said, [the counselor] failed to realize that because I had not had a proper education in Honduras, that ability to actually go to school now gave me a higher incentive to do well than it would have otherwise. So even though I knew absolutely no English when I came to this country, within a year or so I had already completed the four ESL programs,” Melgar said proudly. By 10th grade, Melgar was taking honors classes and was enrolled in Advanced Placement classes the year after.

Melgar’s high school principal encouraged him to apply to several universities, offering to write letters of recommendation for him. But at this time, Melgar was still undocumented and ineligible for financial aid or student loans. So he attended Nassau Community College and Hunter College, studying political science and international relations, paying his tuition by taking semesters off to work.

“I had to get a job, and that was the only way I could pay for my education. In fact, at times I had to work 20 hours a day, six days a week in order to be able to make enough money for the next semester. I would, you know, take a semester off work, then I would go to school the next semester,” said Melgar. “But looking back at it now, I am pleased that it happened that way because I know that I owe nothing, I owe nobody anything…I’m a free man.”

While in school, Melgar became very involved in the immigrant advocacy community. During that time, President Obama introduced the Deferred Action for Childhood Arrivals (DACA) program, which Melgar applied for and was accepted. DACA gives vetted immigrant youth temporary work authorization, as well as the ability to obtain a driver’s license.

It was also during this time that Melgar came to work for New York State Assemblyman Charles Lavine. “So eventually I was invited to a particular event where they were speaking about migrant children and how their story relates to the story of Holocaust survivors.” His Central American immigration experience piqued the interest of a few people in the crowd, and they contacted Assemblyman Charles Lavine. “The next thing you know I was working for him!” exclaimed Melgar.

Melgar realizes that if he had stayed in Honduras, his life would have been very different. “Had we stayed in Honduras, it is very possible that I would not have a future. It is very possible I would have turned to violence. And I say that because you know it’s not something that we choose,” he explained. “You will often hear people [saying] ‘Well why don’t you try to go back to your country and try to fix it?’ and my response to that is, ‘We would if we could’.”

Melgar adds, “DACA is my holy grail. It gave me a driver’s license; it gave me the opportunity to obtain health insurance, a work permit, and now I work for the New York State Assembly, and I may very well possibly be the only DACA recipient in the state who works—I haven’t heard of anyone else—in that capacity.”

Many in the community, however, fear that DACA may soon be repealed, leaving tens of thousands of young people without the ability to work or drive. “For me, DACA is very important. It’s my life. It’s the one thing that allows me to live here like a decent human being.” Still, he remains hopeful that despite the anti-immigrant policies being introduced, the American people see and understand the value of the immigrant community.

At age 26, Melgar is already a success story, and he attributes that to his cultural values of honesty and integrity, values that his father instilled in him from an early age. He also credits his hard work in his family’s coffee business for the ability to recognize an opportunity and make the most of it.