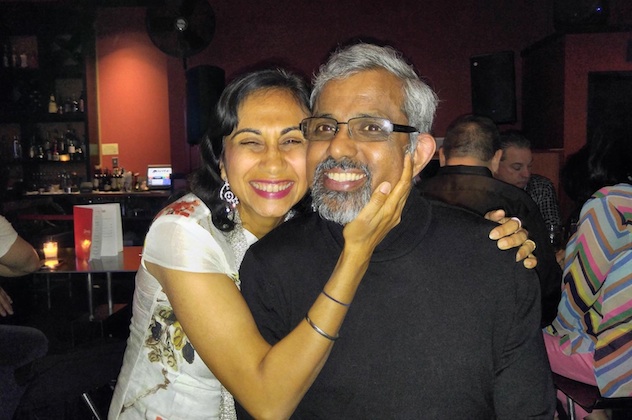 Raju Rajan and Sonia Arora first made Port Washington their home in 2011, along with their young son, Kabeera. Arora is a teaching artist, doing residencies in local schools focusing on literature, oral history and filmmaking. Rajan works for Hewlett-Packard, implementing transformative technologies for large global companies. Both are immigrants from India, and while they have both built successful careers, their journeys to the United States were vastly different.

Arora’s family left Ludhiana, India in 1971 and came to New Jersey when she was just two years old. Her father came to this country to work as a skilled engineer and to give his children a better future. The family then moved to New York where Arora attended school and went on to graduate from Stony Brook University. She received her Masters at the Harvard Graduate School of Education.

Rajan arrived in the United States in 1988 from the seaside city of Chennai in southern India to study at the University of Wisconsin-Madison, where he received his PhD in electrical engineering. Leaving his tropical home to live in Wisconsin was a bit of a “climate shock” for Rajan, like experiencing snow for the first time. “Yeah it was pretty weird, it was fun. I had never lived away from the sea, so I never lived inland. It was very different, but on the other hand, it had a fairly strong tradition of Indian students coming for computer science.”

Even though both are from India, Arora is Punjabi and Rajan is Tamil, meaning they speak different languages and come from vastly different cultures. “Practically every state in India has its own language, has a different food, ethnicity, dance, culture, etc.” explained Rajan. “So it’s almost like going from Punjab to where I live would be the difference between, I don’t know, Scandinavia and Italy.”

Despite their different cultures, religions and journeys to the United States, Arora and Rajan connected through their passion for activism. In fact, that’s how they met. “We actually met within the whole activism scene. I was working in Boston, I had just gotten my graduate degree in education, and I was transitioning to New York,” said Arora. “That’s when Raju and I met.” They worked on a youth solidarity summer camp for Indian-Americans, where they became friends before falling in love and getting married.

Arora attributes her progressive values and political activism to her education and culture, but also her religion. “Some of it really comes from being a Sikh, for me, just valuing community, valuing justice, valuing a sense of equality between people. A lot of it comes from all the wonderful communities that I’ve been a part of through my life.”

She also talks about always feeling like she was “on the margins” and sees it as an advantage. “I never really felt like I belonged anywhere, so that was part of it. And the other part of it is just feeling discrimination, experiencing it in school, or being attacked for who you are, people not understanding where you come from,” explained Arora.

For Rajan, it was growing up in India. “My parents came from the India independence generation, they came from the generation which, when they were just growing up was just when India had attained independence, so they were pretty nationalistic and anti-colonial in their thinking, and that’s always been part of my upbringing…But at some point, I questioned the corruptions within those movements in a certain way. So I have always been political.”

Arora and Rajan began their married life in the Bronx and then moved to Philadelphia, where they joined a progressive group of immigrants, artists and activists who started a charter school for recent immigrant families. “This community,” Arora said, “It had a very progressive political vision, it really wanted to embrace the whole child. Language was really important, culture was very important. The point was not to assimilate, the point was to integrate and to bring your culture.”

Now living on Long Island, they believe it can be a more welcoming and integrated community through efforts in schools and other community institutions. “I feel like our institutions need to be leaders in terms of embracing [immigrants],” said Arora, “I mean, I can be kind to my neighbor and welcome them, but that’s not enough. It has to come down from the leadership of our schools and our community organizations.”

The couple formed Long Island Together, a group of progressives that organizes events in order to “affirm diversity and protect vulnerable communities through interconnected activism.”

“We all decided to come together and start organizing, and fortunately I have come across so many wonderful people,” Arora said. Rajan echoed his wife’s sentiment: “You have to work within your communities, like in Port Washington and Nassau. There are different kinds of diversity that do exist within our communities, and [we are] glad for the people we have found.”