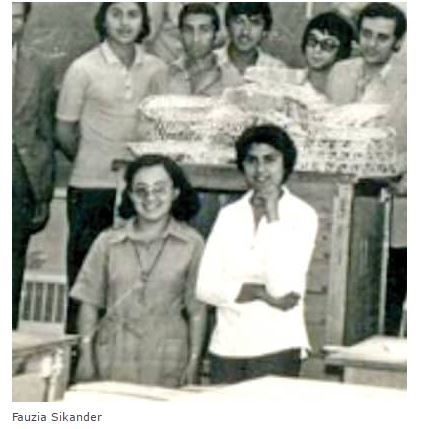 Fauzia Sikander was an architecture student at a university in Kabul when Russia invaded Afghanistan in 1979. At the time, her father was working in the import/export business in the United States.

The political situation in Afghanistan was deteriorating. Young men were being drafted into the army and young women were being incarcerated. Sikander said the stress of having left a young family behind in Afghanistan weighed heavily on her father. Consequently, while in the U.S., he suffered a heart attack and died in 1981.

Believing their lives were in danger, Sikander and her family fled to Pakistan where they could apply for visas to the United States. She and her family were able to get visas with refugee status due to the Russian invasion.

Sikander, her eight siblings, her mother and grandmother arrived in Flushing in 1983, where they all shared a small apartment. As the oldest, she went right to work after finishing clerical school. She was able to find work quickly thanks to the skills she developed in Afghanistan.

Sikander drew strength from her mother, who managed to keep the family together after the loss of their father. “My mother was a very persevering woman, always encouraging, she never gives up. She was an extraordinary woman in my opinion,” she said. “She raised the children, she was very busy with the household, she always encouraged her children to be [a] good person, good people, to be pious, be honest, but still, get your education and be strong.”

It was shortly after coming to America that Sikander met her future husband, Khali. “He came to pay a visit to my mom, he was a distant cousin of my mom,” said Sikander. “And he saw me and for some reason he liked me. We talked for a while, we were sort of dating back then, and then we got engaged.” They married a year later, in 1984.

After that, Sikander started her family right away and eventually settled in Jericho in 1999, where she and her husband raised their four children. Once the children were self-sufficient, Sikander began working in South Woods Middle School as a teacher’s assistant, for 10 years.

The Sikander family travel back and forth to Afghanistan to visit relatives and to make sure their children understood their cultural heritage. Sikander describes life in Afghanistan now as a struggle and very sad, “especially with the children; you see them and there’s no safety whatsoever in Afghanistan.”

Sikander was in Afghanistan when the U.S. dropped the “Mother of all Bombs” often referred to as MOAB. Although she was far from the site, she admits she was scared. “When you go to Afghanistan, when you stay there the whole time, you don’t have peace of mind. You worry, something could happen anytime,” she said.

“People are so tired of war. They just want peace. It’s been so long. Decades. And it’s a beautiful country, and people are very hardworking. They try so hard to work, even the young children,” Sikander said sadly.

Sikander has been deeply affected by the refugee situation coming out of Afghanistan, and in January visited a refugee camp in Lesbos, Greece, with her daughter, Nadia, and others who have been assisting refugees there.

As a refugee herself, she felt compelled by their stories to help. “I heard a lot of horrible stories from refugees and I saw their pictures and some of our people from our community went, and so I wanted to do something from my heart because I know how hard it is.”

She also believed that while it was difficult, her daughter needed to see what it meant to be a refugee. “At the beginning, honestly, I was afraid for [Nadia] because she never had that experience, and she said ‘Mom, I had nightmares.’ She was very sad but she was very strong. She helped a lot with the children, she cleaned the nursery schools, she helped distribute the lunches. For her it was an eye-opening experience,” Sikander said.

While they were in Greece, President Trump signed the executive order that banned nationals from seven Muslim-majority countries. Sikander was worried even though she has legal status in the U.S. and not from any of the countries on the list. “I thought maybe they wouldn’t allow me [back] because of my birthplace in Afghanistan. I told my daughter, I said, ‘Nadia, if anything happens at the airport, you don’t look back,’” she explained. “And [Nadia] said, ‘Mom what are you talking about, how can I leave you?’ I said, ‘No, Nadia, I said because when you go, then you can help me.’ Even my family thought about that. It’s so scary.” They both returned safely and without difficulty.

As for what makes America great, Sikander’s answer is simple: diversity. “America is a land of immigrants. This country was built by immigrants and by diversity and I think we shouldn’t be afraid of differences.”