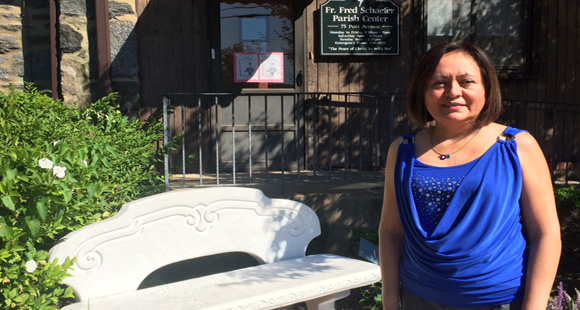 She never imagined that when coming to the United States, she would discover one of her passions.

Yanira Chacon, originally from El Salvador, moved to the U.S. in 1982, escaping violence and oppression from a civil war that ravaged her country. And as most immigrants, she came here searching for a better life and new opportunities. But she never forgets what it was like to live in El Salvador during those horrific years.

“My family was very involved in the Catholic Church, we were part of the dioceses of Monsignor Oscar Romero,” Chacon said. The brutal killing of Romero only escalated the war and tensions for Catholics. “So we went through the whole persecution of the Catholic Church in El Salvador.

During the 1980s, El Salvador experienced one of the worst tragedies in its history. But the experience of witnessing chaos and assassinations helped Chacon realize what she wanted to do in America.

Chacon arrived in the Bronx where she lived with her family in a small apartment. She said her first impression of America was a disappointment because it wasn’t the vision that she had imagined. She continued to be aware of what was going on in El Salvador.

“In those days, El Salvador was on the front page,” she said. “I remember reading The New York Times just to see news about my country.”

Chacon learned English in El Salvador, as she used to work for a bank and needed to understand various documents. When she got to New York she was able to understand English, but had difficulty speaking it.

And then, an opportunity came up.

The recent immigrant started working in Manhattan for the Inter Community Center for Justice and Peace, a coalition of about 40 Catholic religious orders. That is where she realized what her calling was in life: helping other people to adapt to a new lifestyle in the states.

She continued her work with the Catholic Church when she took a job with St. Brigid’s Parish in the Village of Westbury 12 years ago. A friend she knew from the community center, Sister Judy, who was working in Westbury, invited her to be part of a new project at St. Brigid’s Parish, which provides services to immigrant families living in the local area.

The project was called Casa Mary Johanna, where she serves as the director of the program.

“St. Brigid has been historically known by the way we treat immigrants that have been coming to the U.S.”

Casa Mary Johanna offers an after school program, information about immigration, ESL classes and Spanish literacy classes. All those programs function with volunteers from the parish. As director of the program, one of Chacon’s primary roles is to offer basic immigration services, help people understand their documents and translate them when necessary.

This program also helped many of the immigrant families during last year’s increase of newly arriving immigrant children from Central America. Moms were desperately looking for help to register their kids in school, Chacon said. But that was a heart breaking experience for her, as she remembered the reasons why she came to the U.S.

“Last summer we had the wave of new families coming from Central America and we were seeing moms with kids coming to the parish and it makes perfect sense because we have a large immigrant community in this area and they were coming to join their families that were here already,” Chacon said.

“It was hard for me personally because I saw a lot of people from my own country again and the stories that you heard and people were so afraid, and I saw the little kids faces, and they were like ‘This is the U.S. they were talking about’… kind of what happened to me when I came.”

“Everybody wants to learn a second language, but it is not easy if you don’t have the educational background, which a lot of people don’t have,” Chacon said. “You really have to commit yourself if you really want to overcome the obstacles,” she said. 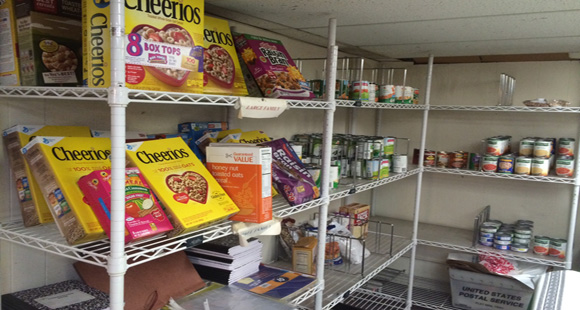 The parish also offers two programs for parishioners in need. They have a food pantry for low-income families and an ID program for immigrants.

People donate different types of food. They feed about 300 people, mostly immigrants, every month. People can go to the pantry, which is open Mondays and Thursdays from 6 to 8 p.m., and those who want to donate can do so by going to the parish general office, Monday through Friday from 9:30 a.m. to 9 p.m.

St. Brigid’s Parish also has an ID program for undocumented immigrants so they can identify themselves. The ID includes information such as the person’s name and date of birth. Chacon said the ID is very important, especially when immigrants need to go to Social Services, local clinics or hospitals.

Immigrants have always been part of Long Island throughout its history. Chacon believes that as Long Islanders, we should welcome all immigrants and that she is now starting to see that change “little by little.”

I asked her a common myth about immigrants that people get all wrong. She said, “we are givers, we pay taxes and we are contributing, we work hard, we love this country. It’s not true that we are here to take.”

As we parted, Yanira Chacon hugged me and said people need to be compassionate with one another and understand what others are going through and one of the ways to get to see that is if people make friendships with people who have suffered. “Be a friend to somebody who is an immigrant. You will have so many things in common,” she said.

When Pope Francis recently stood before Congress, he reminded us of the most golden of rules, “Do unto others as you would have them do unto you.” A rule we all should take to heart.
* This story was published first in Long Island Weekly, an Anton Media Group Publication. To read the original story click HERE.