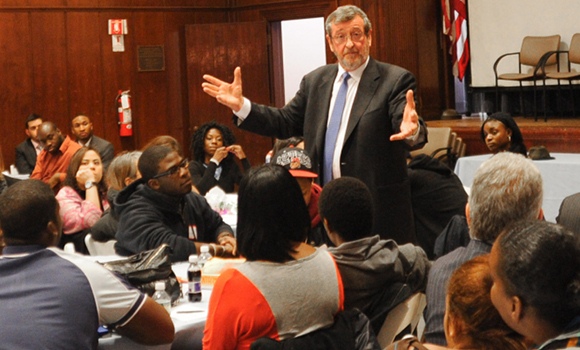 As executive director of Long Island Wins, I’ve had the pleasure of meeting immigrants from all backgrounds, each with a personal immigration story. One of our goals is to use those stories to highlight the contributions that immigrants make to our Long Island communities.

Recently, I had the opportunity to sit down with Michael Dowling, an Irish immigrant and the president and chief executive officer of the North Shore-LIJ Health System, the largest system in New York State and one of the largest in the country.

North Shore-LIJ has a service area that includes over seven million residents in downstate New York, and it’s the largest employer of immigrants on Long Island, from entry-level workers all the way up to the highest reaches of leadership.

Like all immigrants, including those he employs, Dowling has a very personal story of why he chose to come to the United States, and he agreed to share many details of his story for the first time with us.

Dowling first came to the U.S. in the 1960s, which was a time of great poverty in Ireland. He came from a very modest home, describing it as an “old-fashioned thatched house with mud floors and mud walls, no running water, no heat, no anything.”

His father suffered from arthritis, and by his early 40s, he was nearly incapacitated. As the oldest of his siblings, Dowling took on the responsibility of taking care of his family. But to find work, he knew that he would need to leave Ireland.

“Family circumstance determines an awful lot of what you do,” said Dowling. “It was very common back in the 1960s for a lot of people to emigrate from Ireland. The economy was poor.”

After a short time in England working in steel factories, he made the life-changing decision to cross the Atlantic. “New York was probably a better place if you wanted to get a job and make some money,” Dowling told me.

Upon arriving, he took on any job that needed doing. Whether it was in the docks, in construction, plumbing or as a janitor, he did what he needed to do to take care of his family.

For several years, he would work in New York and then return to Ireland to attend school at University College Cork. When he received his undergraduate degree, he came back to New York, where he stayed for good.

“It wasn’t planned,” he said. “It wasn’t like I said to myself I’m going to stay in America. For many, many years I thought I was going to go back. But you know what happens: You start here, you meet people, you begin to get different kinds of jobs, your life takes on a new meaning. I was still able to contribute and send money home. So, being able to help out at home was a major motivation.”

Dowling eventually saved up enough to attend Fordham for his master’s degree, and then Columbia for his doctorate. In the early ‘80s, he became a U.S. citizen. “It was about that time that I decided, ‘Well, this is where I’m going to be.’”

From Fordham, where he was teaching, he was recruited to serve under Gov. Mario M. Cuomo. That seemed at the time like a temporary, tentative choice. But it lasted for 12 years, including service as state director of health, education and human services, as deputy secretary to the governor, and as commissioner of the Department of Social Services. He was later a senior vice president at Empire Blue Cross/Blue Shield.

In the mid-’90s, Dowling joined North Shore-LIJ, at a time of transition, overseeing development, planning and operations, following the merger that created the health system. North Shore-LIJ has seen an unprecedented level of success during his tenure.

“I refuse to accept that there is a limit to what you can get done, and I fail to accept the fact that you can’t do something,” Dowling told me. “The word ‘can’t’ shouldn’t be in the vocabulary.”

That determination and work ethic is how an immigrant from a poor village in Ireland became head of the largest employer of immigrants on Long Island.