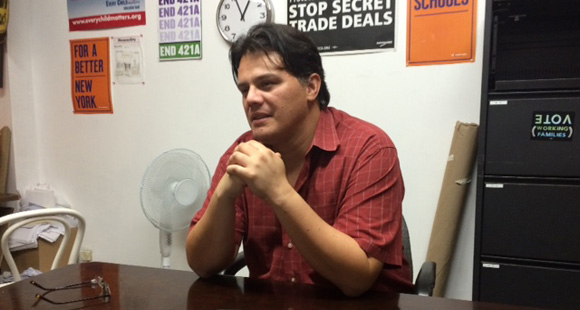 Nothing is easy the first time an immigrant comes to the U.S. It certainly was not for Lucas Sanchez who arrived here from Pereira, Colombia at age 8 with his family on September 11, 1988.

“Being an immigrant in a foreign country is a real challenge, but when there is a strong educational foundation and family support, all barriers are easy to overcome,” says Sanchez.

Lucas said his parents didn’t want to leave Colombia but they had no choice. His father felt he had three choices to make a living – work in the emerald mines, become a traqueto, a small time drug dealer in Pereira, or come to the U.S. The decision was made; he would go to the U.S.

Lucas’s father borrowed money and made the grueling journey across the Mexican desert to the U.S. He worked for a year in a pizzeria as a dishwasher where he struck up a friendship with the owner who lent him the money to pay a “coyote” to lead his family across the border to the U.S.

Lucas, his mother and younger brother met up with the coyote in Mexico and reached the U.S. without much difficulty. Lucas explained that the journey to cross the border in 1988 was not as dangerous as it is now. He considers himself lucky.

Another bit of luck came the way of his family.

Since they had entered the country illegally they were undocumented. However, they were able to legalize their status quickly thanks to the Immigration Act of 1990, signed into law by former President George H. W. Bush. The law provided family based visas allowing undocumented individuals to obtain legal status if a relative who was a U.S. citizen petitioned for them. Lucas’ dad had a sister who was living in the U.S. since the ‘60s and was a U.S. citizen.

Lucas, his mother and brother had to return to Colombia in 1990 and pay a fine of $2000 for each of them in order to obtain their legal status. They were able to return to the U.S. legally within the year. “You can’t possibly do that now,” said Lucas, “I guess we came at the right moment to this country where we got in relatively safe.”

The family settled in Englewood, New Jersey where there’s a small Colombian community. 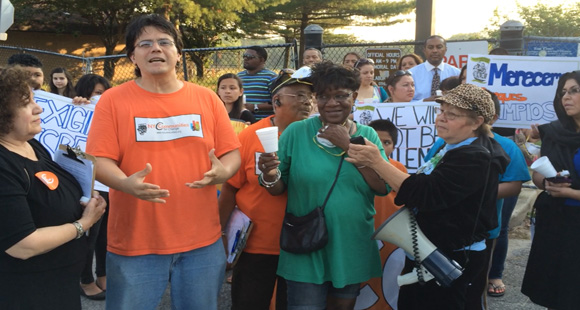 LUCAS AT A RALLY IN SUFFOLK COUNTY.

“My parents’ only mission of being in this country was to get us the best education possible,” Lucas said. “Their obsession of coming to this country was just how are we going to educate Lucas and Sebastian.”

Although Lucas and his younger brother, Sebastian, were enrolled in the local public school, his parents wanted something more for their sons. They knew that education was the key for a successful life.

At the time Lucas’ parents were working cleaning a convent for the nuns who ran a Catholic school. They were able to make a deal with the nuns where they would work and Lucas and his brother would get free tuition. Within a year, Lucas was fluent in English and totally immersed in his life here in the U.S.

The Sanchezes were so strict about education that the boys studied hard, got good grades and were awarded a scholarship to a private high school in Englewood. Scholarships seem to be in the stars for Lucas and his brother. Both worked hard at school and ended up getting scholarships to Columbia University.

After graduation Lucas got a job teaching Spanish in a middle school in a town near where he grew up. It was then that he became interested in community organizing and landed a job as a legislative aid for a state assemblywoman in his district.

He remembers this time as the beginning of what is now his passion in life: community organizing.

Lucas began organizing in Englewood when the town started enforcing its housing codes sending inspectors to Colombian and Dominicans homes and “literally throwing people’s stuff out of the windows onto the front lawn.” So he, his dad and a couple of volunteers started organizing around that. They formed a community organization called ODC, Organizacion de Derechos Civiles (Civil Rights Organization).

“We started doing free ESL classes for adults, getting people involved in the health board, the city council, the zoning board, getting them involved in those things,” Lucas recalls as how he became involved in organizing and giving back to his community.

“I think it’s a combination of how I was raised and the reality of the life that we lived coming here as undocumented folks and having been so fortunate enough that we were blessed by this legal situation that allowed us to adjust our status and then seeing how blessed we are in terms of having been able to do that and the rest of millions of undocumented folks that don’t have that option anymore,” explained Lucas. 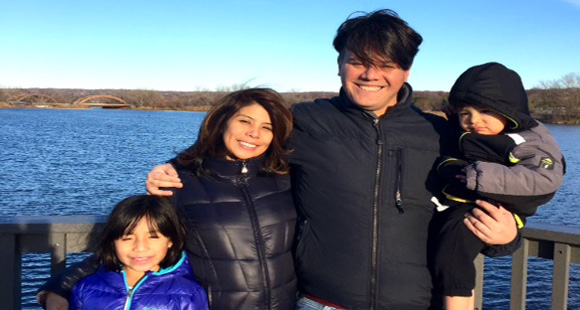 But bigger and better things were calling Lucas to the big Apple. He moved into the city where he did freelance interpreting and translating as a paralegal. There he met an organizer from New York Communities for Change (NYCC), an organization that advocates for social and economic justice in New York State. He was hired as an organizer and has been there ever since. It was during this time that he met his wife, Sandra, a Salvadorian native, and soon started a family.

Once the children came along, Lucas and his wife wanted to be close to Sandra’s parents on Long Island. Lucas was hired as the Long Island Director for NYCC and lives in Mineola with their two young children and third child due in February.

“People need to be aware of the demographic changes on Long Island where the immigrant community is going to be more diverse and richer over the years and folks should decide to be a part of a new and more integrated Long Island,” suggests Lucas, as someone dedicated to social and economic justice.