While the last notes of a well-known Colombian salsa song play out and a Venezuelan merengue is next on the pre-recorded mix, Ana Maria Caraballo, 29, takes a call from a Dominican woman who just won a pair of tickets for an upcoming reggaeton concert.

Having been recently promoted to program director, in addition to her on-air radio personality job for WBON La Fiesta 98.5FM, Caraballo, a Puerto Rican native, is no stranger to dealing with the rich diversity of Latin culture and all the differences that exist between nationalities.

“Latinos are a melting pot,” she said.

Caraballo, who came from New Jersey to have her own show at La Fiesta, was surprised to find such an ethnic diversity east of New York City. “I didn’t even know there was a huge community of Hispanic people on Long Island.”

Through La Fiesta, Spanish-speaking immigrants from Huntington to Montauk have been able to move to the rhythm of music from their native countries, listen to Latino-centric talk shows, and receive important information about everything from immigration policy to charity events.

As a Suffolk-based radio station, La Fiesta is considered “class A” due to its limited geographical reach, a fact that John Caracciolo, the owner of the station, considers an advantage. With a more focused listenership, he can offer cheaper advertising rates than other radio stations that also cover New York City.

“We’re built and continue to be built on local advertisers,” Caracciolo said.

With advertisers such as Huntington Honda, TD Bank, and the Long Island Ducks baseball team, this niche methodology is especially important for La Fiesta, the only Spanish-language radio station that reaches all of Suffolk County. There’s definitely an audience: Suffolk is home to 246,000 Latinos, or 16 percent of the total population, according to a recent Suffolk County Government Comprehensive Plan report. Of those Latinos, theFiscal Policy Institute reported in a 2010 survey that about 170,000 are Spanish-speakers.

Investing in Spanish-language radio could be a good bet, according to a2009 report by the University of North Texas’ Center for Spanish Language Media for Arbitron. “Due to the rapid growth of the United States’ Latino population, Spanish language radio will continue its ascent as a valuable marketing channel that influences community buying habits, as well as remain a uniting cultural force,” the report stated.

When asked about ratings and revenue for La Fiesta, Caracciolo declined to make them public because his company, JVC Broadcasting, is a private corporation.

“We don’t use Arbitron radio ratings…but we have the same advertisers week after week and day after day…they stay with us because we help them to grow and that’s how I judge the performance of the station,” he said.

A 2011 interview with Newsday revealed that JVC Broadcasting had an expected $4 million to $5 million profit for that year—a figure that is partly thanks to the station’s devoted listener base and well-defined market. According to their program manager, Caraballo, La Fiesta has about 800,000 listeners tuning in weekly. In addition to Suffolk County, JVC’s airwaves reach as far as coastal Connecticut, adding to the audience.

Even though La Fiesta is now thriving and its value has grown significantly, according to Caracciolo, in the beginning it was a big financial risk.

In a venture with Victor Canales, a disc jockey and radio personality known as Vic Latino in the radio world, Caracciolo incorporated JVC Broadcasting in late 2008. They bought two radio stations, WPTY Party 105FM and WBON La Fiesta 98.5FM, for almost $3 million. The stations served Suffolk and Nassau counties, and together ranked at #19 in the nationwide market.

“We started these stations at a time when the economy was going down, but we have only grown since then,” Caracciolo said. 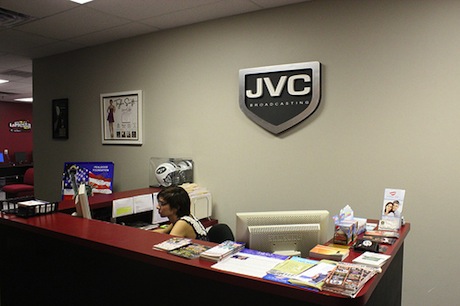 In 2010, JVC bought two more frequencies, a heritage rock station and a country station, doubling the size of the company and becoming the largest independent, privately owned radio group on Long Island.

In many ways, La Fiesta is different from the company’s other radio stations, in that it maintains a diverse audience that is largely attracted by the Spanish-language format. The differences among Latino listeners—from music to vocabulary to customs—are vast, and there are inevitable cultural clashes, according to Caraballo. “Everybody is different…and I love that, but we can’t please everybody.”

This is certainly true when listeners from Dominican Republican long to hear bachata, while someone from Argentina would prefer classic Spanish rock.

“We are a tropical radio station, but I’ve had tried to alter the format a little and include other music, like regional mexicana, too,” she said. 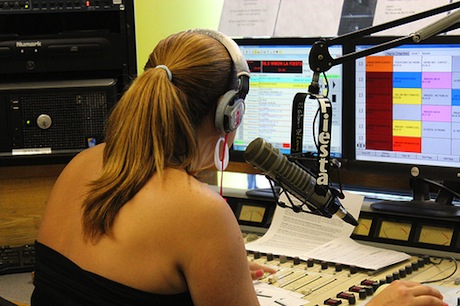 The same happens with the talk shows. A particularly racy show “El Gordo y Compañia”—similar to “El Vacilon de la Mañana” on New York City’s La Mega radio station—is broadcasted first thing in the morning. Detractors of the show object to the language and the crude jokes, but that hasn’t stopped it from becoming one of the station’s most popular segments.

“I try to tone them down, but that’s just their personality and we love them,” Caraballo said. “Some topics are more sensitive than others and they warn the audience if something is explicit…but I think that people [are] just not used to hear what they think; it’s a cultural shock.”

A shock that is one more piece of Caraballo’s daily puzzle as program director, but that, in the end, just brings more sabor to an already flavorful radio station.

Even though Caraballo was born in Puerto Rico, she now feels like an immigrant of many nationalities, thanks to the connection with her audience. Through her mid-afternoon show, “El Jangueo con Ana Maria,”she’s developed a relationship with her listeners, who share everything from their customs to their stories about coming to the US, and even worries about immigration or domestic disputes.

“People are always reaching out to me and I’m there for them,” she said. “If I see something of interest, like what happened with Marcelo Lucero, I get involved. I don’t do it for the cameras, I do it because that could have been me or my brother or my mother. If it’s in my power I’ll always help my community.”

How CARECEN Got Involved with the Sanctuary Movement