In addition to the sector leaders who gathered to discuss immigration policy last month at the Long Island Regional Immigration Summit, New York City Mayor Michael Bloomberg sent a representative from his office to talk about the importance of reforming our outdated immigration laws to attract entrepreneurial talent from around the world.

Robert Feldstein is the senior advisor for policy and strategic planning in the mayor’s office, and works with Bloomberg’s Partnership for a New American Economy, a bipartisan initiative to unite business stakeholders in support of immigration reform. Even Rupert Murdoch is a fan.

Hear Feldstein talk about how emerging industries are moving abroad, and how immigration reform could help create an entrepreneurial culture in places like Long Island:

Text from the video clip:

When we set our immigration laws which was 1965, and it really hasn’t changed much [since] then, expect for mostly more restrictions, we were the place to be. If you wanted to start a company, if you wanted to start something that was a world-changing industry, you were going to try and come to America, that was the place of opportunity. Now, in this decade given the economy in the world, there are surging markets, surging opportunities in China and in India, and there’s places that are fighting for this talent, places that are creating entrepreneurs’ visas, saying, “You have an idea? You have some money? You want to start a company? Come here and you can be a citizen in X number of years”—Singapore, Ireland, Canada, UK.

Chile is offering people with a plan, not only a visa, but $40,000 cash and space to work in for them to start their company, with no commitment of staying. They just figure you get people there, you get them starting companies, you create an entrepreneurial culture. And they’re now in their third class and they’re starting to get Americans going, with American venture capital to go start their company there. Because they know they can get there and the can get their engineer they want from Singapore and their other guy who’s coming from India and they won’t have to deal with American visa problems, they’ll get the cash, and companies are being started there that could have been started here instead.

For a slideshow of photos from the summit, click below. 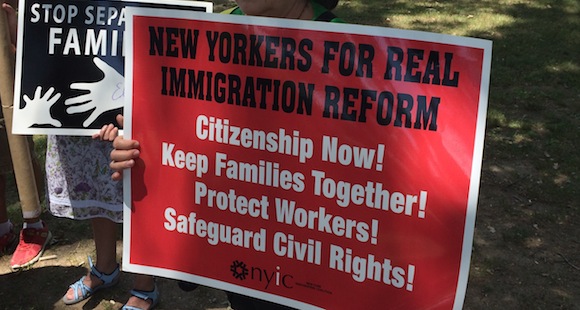 Emily Ruiz Is Back on Long Island

On the Anniversary of Oscar Romero’s Death, Revisiting His Mission

Many in Congress Want to Address Immigration While Trump Tweets