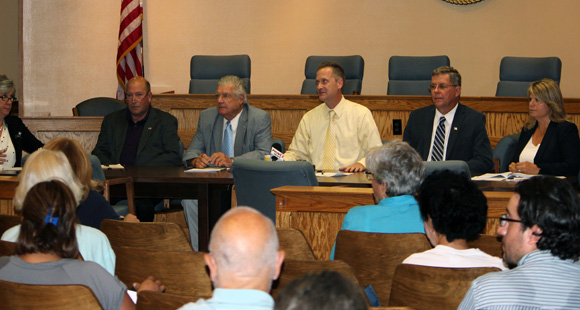 Riverhead Town board members seemed particularly unaffected and at least one of the members didn’t budge from their opinion despite efforts made by a group of prominent panelists at a public educational presentation held recently at the Town Hall to address recent controversial comments that look to change town policy towards undocumented immigrants.

Councilwoman Jodi Giglio, joined by Councilmen John Dunleavy and Gabriel Petersen, recently criticized the town police department’s refusal to detain someone without probable cause and without a judicial warrant, even when there is a request from the U.S. Department of Homeland Security Immigration and Customs Enforcement, or ICE.

The panel members participating in the discussion told town officials in no uncertain terms that the comments were “misinformed, anti-immigrant rhetoric” that create a “climate of fear,” which can only hurt the community by further eroding trust.

“All people in the U.S. regardless of immigration status, are entitled to the same rights and protections,” said Amol Sinha, director of the Suffolk County chapter of the New York Civil Liberties Union and an attorney.

He further explained that if the Town passed a policy that allowed to detain people without probable cause, it would only create problems that would lead to racial profiling, violate federal laws and make local law enforcement’s job very difficult, which could potentially open the locality to serious legal liability.

“Holding someone only under suspicion of immigration violations would be unconstitutional,” he explained, something that “has been recently reaffirmed by the Supreme Court.”

The comments came from the town officials’ belief that Riverhead policies are similar to those of so-called “sanctuary cities,” a term that has been distorted, according to Sister Margaret Rose Smyth, executive director of the North Fork Spanish Apostolate, who was in the audience.

Smyth said that sanctuary means “We welcome all,’” and added that misinformation regarding the term is very typical because “people hear things and repeat things without checking what they really mean.”

Connie Lassandro, chair of the recently restarted Riverhead Town Anti-Bias Task Force, said that the way some town members are referring to the term “sanctuary city” is based on misinformation and that they should focus on making Riverhead a welcoming community.

“When there is misinformation, really awful anti-immigrant rhetoric comes out and people start to believe it,” said Maryann Sinclair Slutsky, executive director of Long Island Wins, who put together the educational panel. “Hopefully we can clear up a lot of those issues today.”

Councilwoman Giglio said last month in reference to undocumented immigrants, that “if the federal government wants to interview them, we need to figure out a way to hold them.”

Giglio stood by her comments Thursday after the session ended and added that she thinks “a sanctuary city is still a place where there are criminals who can come to and they are not going to be addressed.”

She said that anyone who doesn’t have proper identification and that commits a crime, even if it’s a traffic violation, should be held by the police department regardless if there is a warrant or not for their arrest.

Police officers in Riverhead enforce local and state laws, he said, but “immigration is up to the feds to take care of.”

Hegermiller said that if a warrant existed for an undocumented immigrant’s arrest, they would hold those individuals, an event that has happened very few times over the years.

Other police departments in Suffolk and New York State follow the same course of action and don’t hold undocumented immigrants without probable cause and a warrant in place, said Sinha.

“A lack of lawful immigration status is a civil, not criminal, violation,” he explained.

He went on to say that this was a matter of public safety for all residents in a particular community.

“It doesn’t benefit anybody if significant portions of our community are fearful and untrusting of the institutions that are designed to serve and protect them,” he said.

A comment that was echoed by Daniela Guillen, a Riverhead resident who spoke on behalf of other immigrants who share a similar story.

“I know what it’s like to live in fear, fear of deportation… you can’t do anything, not even call the cops, because of fear of something happening to you…it’s scary,” she said.

Guillen, a career placement developer at Pathstone, a nonprofit organization that helps agriculture workers with employment and training, addressed the panel and explained how she came to the U.S. with her parents from Honduras when she was 11 years old.

Her father, a banker in Honduras, was looking for a better life for his family away from the daily violence and dangers of their native country. Once in the US he got a job cleaning horse stables, and she and her three sisters had to adapt quickly to a new culture and a new language always fearing that one day their parents were going to be taken away.

Once she graduated from Port Jefferson High School she had to put her dreams on hold as she watched her classmates go on to pursue college degrees. Even the most basic necessities, like driving or working, were not allowed. But all of this changed with the announcement of the Deferred Action for Childhood Arrivals in 2012 by the Obama administration, which granted certain undocumented immigrants who came to the U.S. before their 16th birthday and before 2007, a renewable two-year work permit and exemption from deportation.

“It was liberating,” Guillen said. “I was able to work legally and drive, which are simple things for people my age…for me, were a big deal.”

With the help of her parents she enrolled herself in Suffolk County Community College, where she will graduate this coming fall.

“I have worked hard my whole life,” she told town members. “I am not a criminal.”

She said in an interview later that the anti-immigrant comments, made by some of the town members, “only make things worse because people won’t want to come forward. It just turns everything into the opposite direction.”

A sentiment that was shared by the panelists and several members of the audience.

“The rhetoric floating around town was starting to get a little dangerous and scary and I think we really need to understand what the situation is,” said Neil Krupnick, president of the Northville Beach Civic Association who’s running for Town council in November’s elections.

“People need to realize these are human beings we are talking about, our neighbors, and they have constitutional rights,” he said.

Town Supervisor Walter complained of how hard it’s been to achieve representation from the Latino community at the government level, despite of the outreach he says the Town has been conducting for a long time.

“I’ve been asking for at least two years for the leaders of the immigration community to step up, and they have not come forward for reasons that are not so obvious to us,” Walter said.

Smyth fired back saying “Why would they? They are very aware of what some people of the town board have said.” Nevertheless, she says that she looks forward to the day the board is going to reflect the community.

She later added in an interview that she felt that the meeting had been very positive and that she was happy with the turnout and the dialogue that took place.

“This is a first step to make things better for everybody,” she said. “It’s time to make Riverhead a shining star among other towns in Suffolk County and focus on the positive.”

Sinclair Slutsky said that the goal of the presentation was to give board members clear facts on what the law is regarding undocumented immigrants and she said that it had been productive.

“Hopefully this is the first of many more meetings to come,” she said.

Long Island Wins plans to take this presentation “on the road” to other towns and municipalities around Long Island. 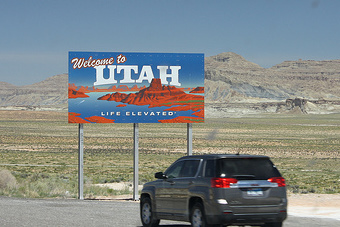 If Arizona Can Criminalize Undocumented Status, Why Can’t Other States Legalize Immigrants?